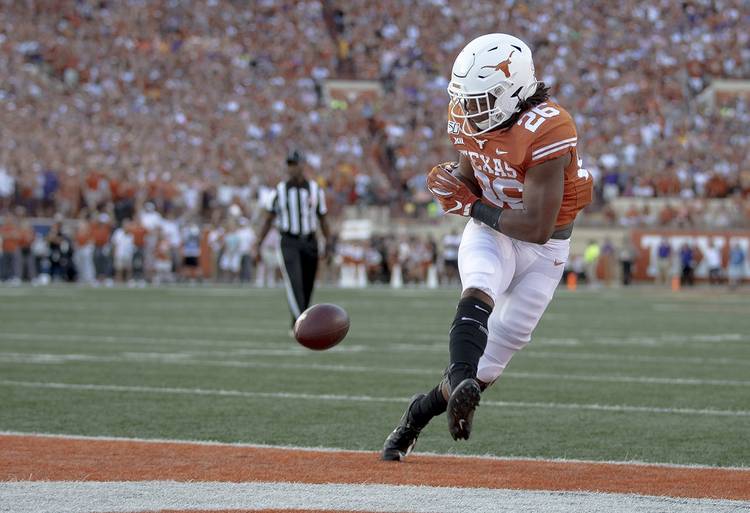 In a tight matchup, missed opportunities will be the ultimate culprit. Two first-half drives reached LSU’s 2-yard line. The Longhorns came up empty both times. The defense stood toe-to-toe with the Tigers for a quarter-and-a-half, then gave up two scores late in the second quarter and couldn’t come up stops in the second half. Trading scores is fine — unless you’re trailing by two touchdowns, as the Horns did at halftime. The Longhorns certainly looked game for a comeback in the second half, but the Tigers matched them score for score. Texas trailed by two touchdowns at halftime and lost by two touchdowns at the end.

Joe Burrow completed 31 passes. It felt like 30 of them went over the middle. LSU’s new offense clicked most of the night; the running game managed only 102 yards, but the Tigers put up 573 yards of total offense, Burrow threw for 471 yards and four touchdowns, and the Tigers answered every Texas score in the second half with scores of their own.

In terms of the College Football Playoff, it means the Longhorns now have no more margin for error. A two-loss team won’t make it. So Texas would have to win out, presumably beating Oklahoma twice, and win the Big 12.

“I don’t want to downplay the significance of the matchup,” Herman said at his Monday press conference. “I think it’s really important for us. We understand that to get to where we want to go as a program that we’re going to have to play in and to win these type of games. And to do it against another top-10 opponent is pretty cool, especially at home.

“But I also know that Bob Bowlsby’s not going to be handing out the Big 12 championship trophy after this game, either. … We know there’s a bigger-picture goal out there as well.”

1. Two games in, and the running game continues to be a worry spot. Jordan Whittington and Daniel Young and Kirk Johnson cannot get back on the field soon enough. Keaontay Ingram had only three carries for 10 yards in the first half. Texas finished with 121 yards; Ehlinger was the leading rusher.

2. In the Sam Ehlinger vs. Joe Burrow matchup, call it a draw. A fairly spectacular one, too.

3. In the DBU vs. DBU battle, the edge went to LSU. Tigers cornerback Kristian Fulton looked as good as advertised, though he was a bit hands-on when it came to coverage. He matched up most of the night with Collin Johnson, who was held to three catches for 49 yards. All-American safety Grant Delpit (3 tackles) had a quiet night, and Derek Stingley Jr., LSU’s five-star freshman corner, looked sharp. Texas’ Caden Sterns and nickel back B.J. Foster tied for the team lead in tackles, and Brandon Jones nearly came up with the defensive play of the game late when it appeared that he might have forced a fumble, but replays upheld the catch. Jalen Green shined in the opener, but not so much tonight. And Kobe Boyce, who didn’t shine in the opener, nonetheless got the start again at corner and, again, gave up some big plays.

4. Kudos to Texas for whatever was discussed at halftime. Down 20-7 at the break with LSU getting the ball to start the third, the Longhorns forced a punt on LSU’s opening drive and then Ehlinger directed a 19-play, 86-yard touchdown drive that ate up 7:17 of clock. His 1-yard run — his first rushing touchdown of the season, after breaking Vince Young’s school record for quarterbacks with 16 rushing scores — made it a 20-14 game.

Texas’ turned all five of its second half drives into points — four touchdowns and a field goal.

5. There were several big moments — Ingram’s dropped touchdown catch, Joseph Ossai’s interception among them — but a real critical one came with 12:16 left to go, and Texas trailing 30-21 and facing a fourth-and-3 from LSU’s 44-yard line. Herman went for it, and Ehlinger found Duvernay for a short slant route. The play would’ve gone for a first down, but Kary Vincent Jr. and Neil Farrell Jr. both missed tackles and Duvernay scampered in for a 44-yard score.

6. An equally big moment went LSU’s way on the ensuing drive, when Burrow found Jefferson for the long 61-yard touchdown.

7. Texas’ last gasp was an onside kick with 22 seconds left. Collin Johnson corralled it on the sideline, but it was ruled that he didn’t have control of it as he went out of bounds.

8. The hit of the game: Chris Brown, on third-and-6 from the 22, leveled running back Clyde Edwards-Helaire as he extended to make a catch out of the backfield. Easily the hit of the game on a night where both defenses were plenty physical.

9. Attention, Central Michigan: You Chippewas are now on explosive play watch. Ehlinger’s 55-yard touchdown pass to Brennan Eagles in the second quarter was the Longhorns’ first play of 50 or more yards since 2017. Last year, the Longhorns and the Chippewas were the only two teams in the country without one.

Texas at Rice, 7 p.m. next Saturday, NRG Stadium in Houston

Nothing like a short road trip to play an old Southwest Conference foe that you’ve had little problems with in recent history to get past a tough loss. It’ll be Texas’ final tuneup before the start of Big 12 play.