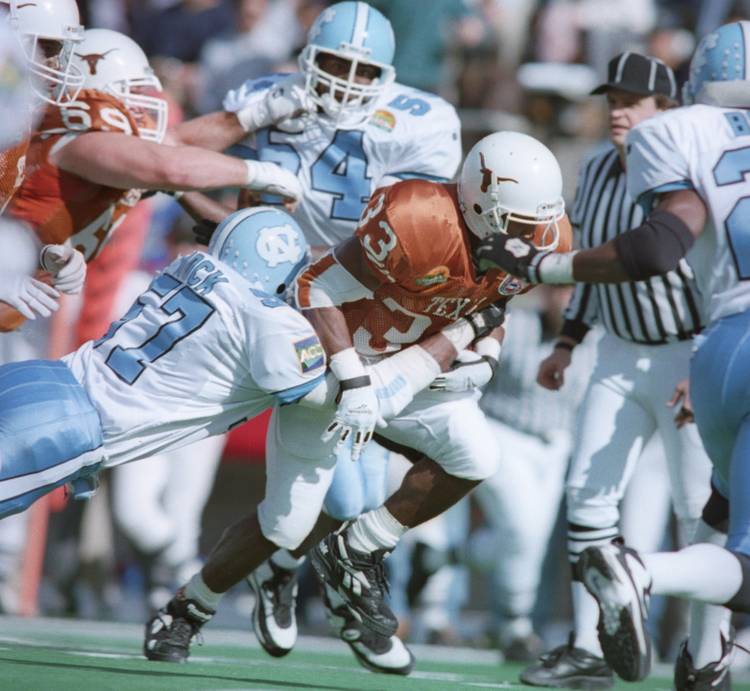 John Mackovic’s 1994 squad finished tied for first in the Southwest Conference with a 4-3 record (A&M was on probation that year) and a 7-4 overall mark heading into the 1994 Sun Bowl. The Horns’ opponent that year – Mack Brown’s North Carolina Tarheels – entered the contest ranked No. 19 with a 8-3 record.

The ’94 squad was led by freshman James Brown at quarterback – he had taken over the starting job midseason, surpassing Shea Morenz. Rodrick Walker was Texas’s leading ball carrier that season, but the Sun Bowl was a showcase for future NFL star Priest Holmes. The San Antonio running back gashed the Tarheels on the ground with 161 yards and four rushing touchdowns. He also added two catches for 44 yards as the Horns pulled away late, 35-31.

Chris Carter led the defense with 14 total tackles and one interception that he returned 69 yards. Tyson King had 12 tackles and defensive end Norman Watkins returned a fumble 8 yards for a touchdown.

Some highlights of Texas’ win:

Priest Holmes’ 1-yard TD run (on 4th down) in the second quarter:

Priest Holmes’ game-sealing 4th quarter touchdown run (including a dive from the 5 yard-line):