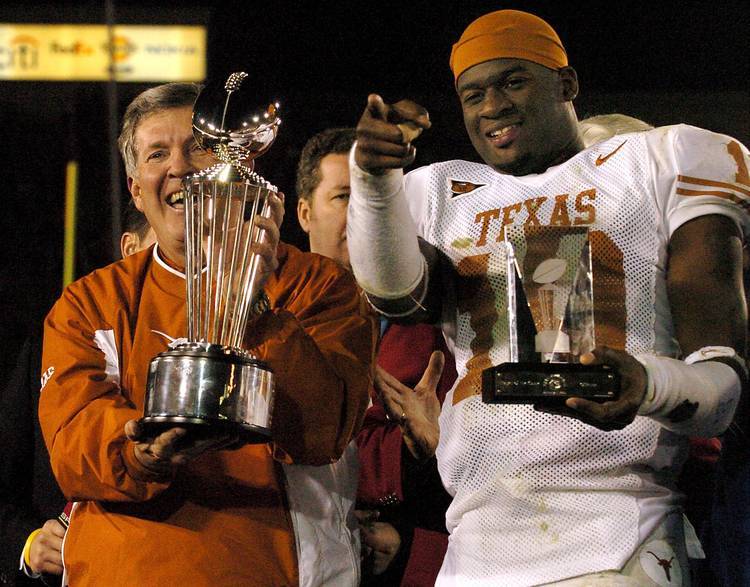 The ESPN studio analyst’s name has popped up here and there in the 24 hours since Art Briles was removed as head coach amid a sexual assault investigation. Brown hasn’t coached since the end of the 2013 season but certainly knows the landscape in Waco from his 16 seasons coaching at the University of Texas.

I spoke to a source close to Brown who indicated that the former coach is comfortable with his life out of stadium.

With that said, here are the pros and cons of a Mack-Baylor marriage:

– Brown is the perfect PR replacement. Briles’ reputation is in tatters after the Pepper Hamilton Report revealed his role in an attempt to cover up alleged sexual assaults by his football players. Brown was scandal free at Texas and ran a clean ship from all indications.

– Recruiting. Brown knows the streets of this state having been one of the best recruiters in the country in his heyday. For the better part of a decade, he delivered top-five recruiting classes to Texas.
– He has won. Before things went south at Texas, Brown registered nine 10-win seasons, a national championship in 2005 and a national title appearance in 2009. He also coached a Heisman Trophy winner in Ricky Williams.

– His age. By the time the 2016 season kicks off, Brown will be 65 years old. Sure Nick Saban is in the same age range but he is playing with house money with all those championships. Brown’s last five seasons at Texas aged him considerably.
– The fire. Are we certain that Brown would still have the same fire in his belly that existed when he was carving up the opposition during the Vince Young-Colt McCoy eras?
– He’s comfortable at ESPN. Brown has found a nice little niche as a college football analyst and showed a nice touch as a color commentator during bowl season. He told me last year that he was having fun. “I’m undefeated every weekend,” he said. His current gig is a lot less stressful than recruiting and coaching against the likes of Bob Stoops, Gary Patterson, etc., every season.
– The timing. The season starts in three months and Brown doesn’t have a staff. If he came back, it would more than likely be in 2017 and by then he would 66.

I don’t see it. Mack has been away from the game for too long and is very good at his current occupation. He had a great coaching career and won a championship. Coaches never lose the itch but Brown has had his day. Plus, he appears comfortable in coaching retirement.

As for Baylor, I see them going after someone like Larry Fedora or Tom Herman. I’ve even heard Bears legend Mike Singletary’s name come up even though his defensive philosophy conflicts with the high-powered offense Briles put together over his eight seasons. Plus he’s never coached in college which would make recruiting a real challenge age age 57.