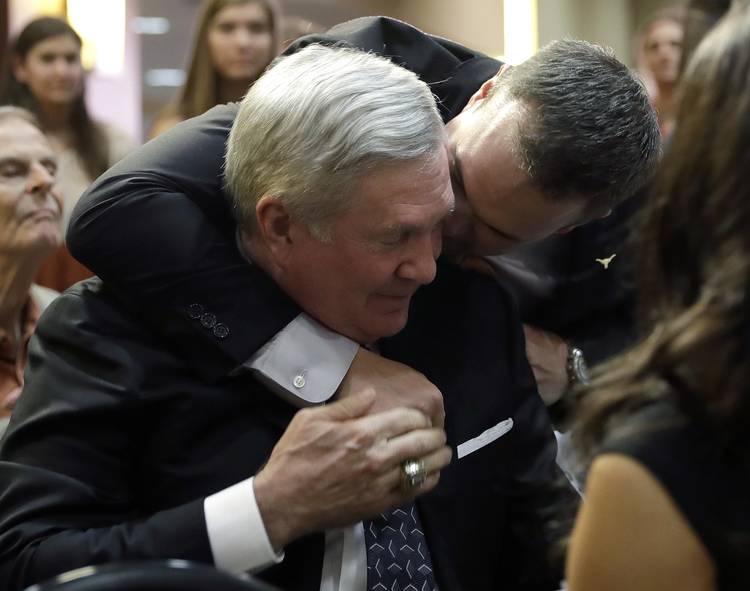 Tom Herman just completed his coaching staff at Texas and it features an offensive coordinator who helped his team to the College Football Playoff, a defensive coordinator that’s had success at multiple stops and several top-notch recruiters.

But how does it compare with Texas coach Mack Brown’s first staff in 1998?

When Mack Brown left North Carolina after a decade with the Tarheels, he put together a talented group of coaches that would feature two future head coaches and several who would remain on staff for more than a decade.

The offensive coordinator was Greg Davis, of course, who coached at Texas from 1998 to 2010, developing quarterbacks Vince Young, Colt McCoy, Chris Simms and Major Applewhite. Say what you will about bubble screens, but Davis’ offenses were some of the best units in the history of the program. Under his watch Ricky Williams became the all-time leading rusher in NCAA history and Cedric Benson finished in the top five all-time. He resigned in 2010 and is now the offensive coordinator at the University of Iowa.

The defensive coordinator was veteran Carl Reese, who had been a defensive play-caller for 28 years by the time he got to Texas and arrived after a stint with LSU. He retired in 2003 after improving the Texas defense from 104 nationally before he arrived to a pair of top-10 total defense finishes in 1999 and 2000.

The staff is highlighted by two future head coaches.

Tim Brewster coached tight ends from 1998 to 2001. Brewster is one of the best recruiters in college football and helped Texas land a number of talented players, including a guy named Vince Young. Brewster left Texas for the same job in the NFL with the San Diego Chargers, then coached with the Denver Broncos before becoming the head coach of Minnesota in 2007. He was fired in 2010 and resurfaced at Mississippi State in 2012 before moving to Florida State in 2013. Since joining Florida State, the Seminoles have pulled down some of the best recruiting classes in college football.

Bruce Chambers coached running backs then tight ends from 1998 to 2014 at Texas.

Mike Tolleson was the special teams coach from 1998 to 2010, when he retired.

Hardee McCrary coached defensive ends from 1998 to 2003. He went on to be the associate director of development of the Longhorn Foundation before becoming the high school  relations director for Texas football in February of 2016.

The offensive line coach was Tim Nunez. He was let go in 2003. He was the first assistant coach officially fired, or as Texas puts it “not have his contract renewed.” But whatever shortcomings Nunez had during the early 2000s, he also recruited some of the best offensive linemen to play at Texas under Brown. In 2002 Nunez signed Lyle Sendlein, Kasey Studdard and Justin Blalock. Other linemen he brought on include Derrick Dockery and Jonathan Scott.