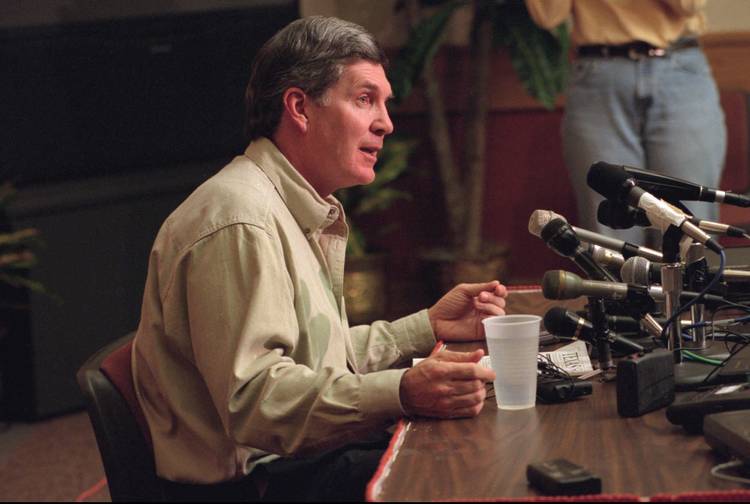 University of Texas head football coach, Mack Brown, is surrounded by microphones in 1998 as he meets the press following a day of signing up young athletes into the Longhorn Football Program. Coach Brown talked about the players that were signed by UT. (Photo Tom Lankes )

On the eve of Tom Herman’s first signing class at Texas, we re-visit what the staff wrote about Mack Brown’s first class of 18 recruits in 1998.

Kirk Bohls penned the column below after chatting with signees Ahmad Brooks and Victor Ike. Former Texas A&M head coach R.C. Slocum chimes in on his thoughts on Brown and his first year on the job.

“He’s a good communicator, and they’ll get players,” Slocum said in 1998. “But they always get players. If you haven’t played a game yet, though, you have all the answers. You’re bulletproof and invincible.”

Below is the original column:

Mack Brown took the news as well as could be expected and a whole lot better than Ahmad Brooks thought he would. About a week after the Abilene quarterback/receiver committed to Texas, Brooks called the Longhorns’ first-year head football coach.

“He gets real quiet, ” Brooks related. “Then he asked, `Now why would you want to do that?’ He sounded so concerned. I was going to keep it going a little longer, but I couldn’t. When I told him I was kidding, he just started laughing.

What’s better, the 18 recruits Brown signed are coaches’ players — i.e., players who help coaches keep their jobs. They were in almost as much demand as was Brown.

Word is the Dallas Cowboys even showed interest in hiring Brown as their new head coach. He did not deny it, but said, “I’ve always coached college football, and I love college football.”

Luckily for Longhorn fans, he loves recruiting, too. It shows with a class of speedy, multi-sport athletes that is shy on defensive linemen and cornerbacks but strong on 40-yard dash times and pedigrees. Two are Parade All-Americans, 11 are Fabulous 55 members.

Brown raved about his players in fatherly fashion Wednesday, describing them as “bubbly” and “big hitters” and “fast.” He was so impressed with Brooks, for instance, Brown said he, “could be the governor of the state someday.”

The Longhorns would prefer that Brown rule this state, and he well might. It is a strong if not spectacular recruiting class that, given the late start for Brown and his staff, is amazing. The group should serve notice to Texas A&M’s personable R.C. Slocum that there’s a new kid in town, a guy so popular he should go by Mack the Nice.

“I think Mack will do fine,” said Slocum, who appreciates Brown’s all-Texan class. “He’s a good communicator, and they’ll get players. But they always get players. If you haven’t played a game yet, though, you have all the answers. You’re bulletproof and invincible.”

Slocum’s right about that. The effervescent Brown has as many wins as losses on a Texas sideline, but he hasn’t made a wrong move in a living room or at a luncheon. If he had done anything better the last two months, he already would have been rewarded with a contract extension by Bill Cunningham.

Recruiting has always been this 46-year-old Tennessean’s forte. Brown had picked up 17 commitments at North Carolina before leaving and only one changed his mind afterward, a testament to the coach’s sales job on the Tar Heels. He ethically recruited none of those for Texas.

On the other hand, Brown swayed Bowie running back Victor Ike, top lineman Antwan Kirk-Hughes and revved-up linebacker Everick Rawls and his three teammates from the Aggie fold. He persuaded safety Lee Jackson into being a Longhorn instead of a Miami Hurricane. He kept receiver Montrell Flowers from Baylor and lineman Mike Williams from Oklahoma.

He came close to importing UCLA-bound running back DeShaun Foster from California, but the Bruins’ huge victories over Texas, Houston and A&M might have sold him on UCLA Coach Bob Toledo’s premise that football is better on the West Coast even though Brown had nothing to do with 66-3.

Who doesn’t? His congenial, almost cuddly style appeals to 18-year-olds and 68-year-olds. He shoots straight. Some acquaintances say he’s so nice, they wonder if he has the mental toughness to handle the stiff demands of the Texas job. They worry a little that he might be too player-friendly like David McWilliams, who could have used a firmer hand. We’ll see.

“If I can stay undefeated and just go through another recruiting year, this would be fun,” Brown said. “The games are what get in the way.”

In this long-running pregame show, he’s gotten straight As. He might be Texas’ best recruiter ever.

If it’s one thing Brown can do, it’s close. Many Orangebloods used to fret that a late, in-house visit by predecessor John Mackovic could turn off a recruit and send him elsewhere. Others wonder if Mackovic might not be a better game coach than Brown in terms of game planning and play calling, give or take a quarterback sneak.

That side of Brown remains to be seen.

Brown obviously realizes recruiting is the lifeblood of a Top 25 program and he relishes it. UT signed 18 of the 27 players it offered scholarships. That’s a solid ratio. Brooks said he didn’t hear one negative comment about Brown from any opposing recruiter.

Brown can even take a joke. Actually when Brooks made his prank call to Brown in January, his intention was to ask the coach for a specific number. Jersey No. 5.

“My real number is 11, ” Brooks sighed, “but I know I’m not going to get that one (worn by running back Ricky Williams).”

Even Mack Brown doesn’t have that good a sense of humor.