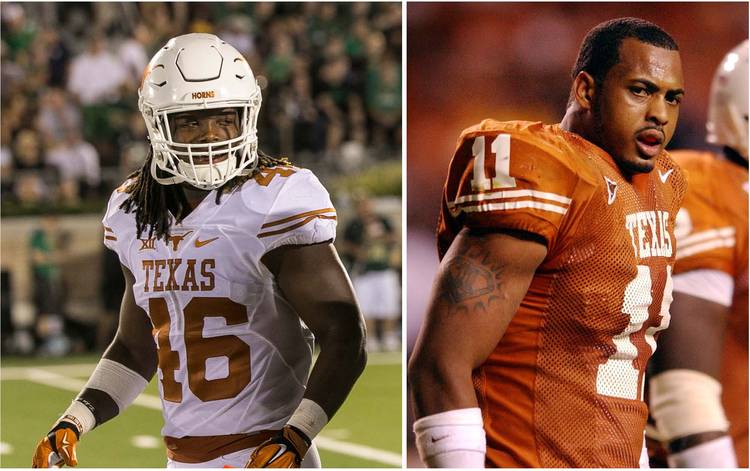 The comparisons between Malik Jefferson, left and Derrick Johnson have already begun.

Linebacker Malik Jefferson was impressive in his Longhorns’ first start Saturday night. Coach Charlie Strong characterized Jefferson’s performance as “very good.” As one of the sole bright spots in the 38-3 loss to Notre Dame, Jefferson said “I wanted to go out there and dominate. I’m not used to getting scored on. That’s something I’ve grown up doing.”

Jefferson also called making his debut in Notre Dame Stadium “a true honor to be in a stadium with a lot of history in it.” He finished the night with nine tackles, second on the team to Peter Jinkens’ 10.

The comparisons to another former highly-decorated Texas linebacker have ramped up after one game. Derrick Johnson arrived on campus in 2001 as the #5 ranked recruit in the state on the Austin American-Statesman’s Fab 55. Jefferson was ranked #1 on the 2015 list.

The Waco linebacker didn’t start his first game with the Longhorns. In the 41-7 season opening win versus New Mexico State, Johnson “played mostly on special teams, but turned in one of the better defensive plays when he split two blockers and stopped New Mexico State running back Walter Tyler for a 3-yard loss in the second quarter,” according to the Statesman’s notebook from that game.

Johnson went on to become a two-time All-American at Texas and was recognized as the Big 12’s defensive player of the year his senior season. He currently is in his 11th season with the NFL’s Kansas City Chiefs.

So how did the linebackers compare in their first game as Longhorns? The impressive statlines: