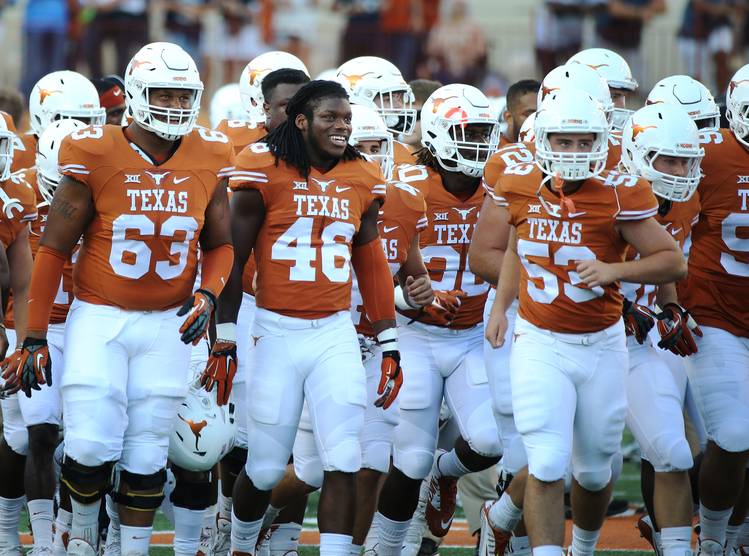 Texas's players, including Malik Jefferson (46) leave the field after warming up before their game against Rice at Royal Memorial Stadium on Saturday, September 12, 2015. DEBORAH CANNON / AMERICAN-STATESMAN

On the field, football fans should expect more of the same from sophomore linebacker Malik Jefferson.

At a press conference on Wednesday, Texas defensive coordinator Vance Bedford said that Jefferson’s role won’t change much in his second year on campus. One season after he logged 61 tackles, 2.5 sacks and three pass break-ups, the inside linebacker will still be found in the heart of the Longhorn defense.

Said Bedford of the Big 12 Conference’s Preseason Defensive Player of the Year: “His role hasn’t changed. Last year, we brought him outside. He played Mike linebacker, he played Fox. We’re going to do the same thing this year. He’s our Mike linebacker… we’re going to bring him off the edge sometimes, but primarily he’s going to be inside as he was this past season.”

Bedford said that Jefferson needed to improve on getting off of blocks and his play in pass coverage, which includes not coming out of coverage when a quarterback scrambles. Bedford also said that Jefferson wasn’t needed or used as a leader during his freshman year, and that he was now beginning to lead the Longhorns by example. Bedford added that Jefferson’s next step was to become more outspoken.

“Leaders sometimes, they need to walk alone,” Bedford said. “He has to figure that out right now.”

Vance Bedford: Sell your Notre Dame tickets? ‘Go out and sell a cow’