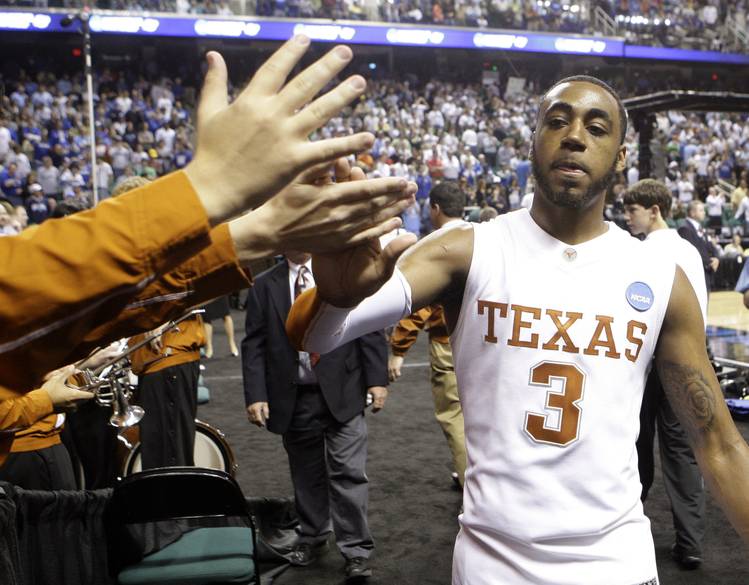 The NCAA Tournament begins this week and Texas is in the field with a date with Northern Iowa on Friday in Oklahoma City.

It was literally a long road to get here. A road taken by a new coach with stops in extended stay hotels, cramped airplanes and games in three different countries.

But forget all that.

It’s tournament time for the Longhorns. It’s time to remember guys like Brian Boddicker, Travis Mays and B.G. Brosterhous. Like we’ve done all season, let’s walk down memory lane with our dancing shoes.

Here are the 10 Texas NCAA Tournament individual performances to remember:

Try playing basketball with a broken foot. It’s not easy (no matter what Cam Ridley says this week). Players have to run and jump and do athletic things to their feet. It’s hard. Larry Robinson scored 23 points and grabbed 14 rebounds with a broken foot against Houston. His performance led Texas to an upset win over a powerhouse Houston program, 85-74.  Remember, at the time Texas and Houston were in the same conference, and Houston was the program of the era.

Texas trailed the Musketeers by 16 in the second half, but Lance Blanks woke up and dominated the upstart Xavier team, led by coach Pete Gillen. Blanks’ “get on my back” performance yielded 26 second-half points after he scored just two in the first 20 minutes. Travis Mays scored 32 for the Longhorns in the game (see below for more on him), and Joey Wright added 26. But Blanks’ second half performance is one of the best 20 minutes a Longhorn has played in the tournament. Texas won 109-89.

Texas lost to Arkansas in the Elite Eight 88-85 the next game.

The best performance in the biggest win

Ford was the John Wooden Award winner this season, and Texas advanced to the Final Four with this win. Ford didn’t shoot well against the Spartans (4-of-12 from the field), but he was 11-of-13 on the line, scored 19 points and had 10 assists. He had the San Antonio crowd in a tizzy as Texas advanced to the Final Four for the first time since 1947 (when only eight teams were invited to the tournament). Brandon Mouton, Brian Boddicker, Sydmill Harris and Brad Buckman all scored in double figures in the game, but it was Ford who was driving the car this season.

The shots to remember:

Ridley’s rebound and putback in the final seconds lifted Texas to an 87-85 win at the buzzer over Arizona State in Milwaukee at the Bradley Center.  The game-winning play came as Jonathan Holmes missed terribly in the final seconds, but Ridley was in perfect position for the score. Ridley’s score put a cap on perhaps the big man’s greatest moment as a Longhorn (so far). The then-sophomore scored 17 points and grabbed 12 rebounds in the game. The 7-seed Longhorns fell to Michigan in the next round, 79-65.

We covered this moment earlier this season, but Paulino’s shot put Texas in the Elite Eight.

Myers blocked a Tony Jones shot in the final seconds that helped Texas win a 73-72 game over Gene Keady’s Purdue Boilermakers (playing virtually at home in Indianapolis). After Travis Mays converted a pair of free throws with seven seconds left, Purdue set up a play, but Myers was all over it.

Texas Western was on the rise and would win the NCAA National Championship in 1966 (it has to be true, I’ve seen the movie), but Texas was making a successful run of their own (and Kirk Bohls wasn’t even covering them yet!).  Humphrey scored 18 points and grabbed 10 rebounds as Texas reached the Sweet 16 for the second time in four years.

Brosterhous was drafted by the Chicago Bulls, but he never played in the NBA. He had a career average of 8.8 rebounds for Texas. His nephew, Kyle Singler, won a national championship with Duke in 2010.

Travis Mays dropped 44 points on Georgia in the first round of the NCAA Tournament in a 100-88 win. It was an upset win as the 10-seed Texas beat the 7-seed Bulldogs. The 44 points Mays scored is a Texas tournament record for points and his performance in this tournament is one greatest ever. He made 23 free throws in this game. The 27 free throw attempts is still tied for most ever in an NCAA tournament game. In six career tournament games (four coming in 1990) he averaged 26.7 points, the highest tournament average by a Longhorn.

Mays was drafted 14th overall by the Sacramento Kings in 1990. He is the second all-time leading scorer in program history with 2,279 points and was inducted into the UT Men’s Athletics Hall of Honor in 2002.

He is currently the associated head coach of the Texas women’s basketball team.

Twice Abrams had stellar 3-point shooting games. This is not the most made in game though. Abrams’ record 3-point shooting night came the following year against Minnesota when he nailed eight in a 76-62 win in the first round.  However, we’re singling out the 2008 game because Abrams’ overall performance was amazing. He nailed six 3-pointers, scored 26 points and went 6-fot-6 from the free throw line, including converting two in the final 10 seconds that iced the game for the Longhorns.

It was the second game in a row that Abrams made six 3-pointers.

Durant gets a special shout out because his lone season at Texas is the greatest single season in Longhorn history. It’s crazy to look back and think he played just two NCAA games (two more than 2016 freshman phenom Ben Simmons will). Despite the small sample size and the terrible-ness of this USC game, where Texas lost to the Trojans 87-68 (Rose Bowl payback maybe?), Durant set the Texas NCAA tournament record with 11 field goals made. He finished with 30 points, two blocks and nine rebounds.