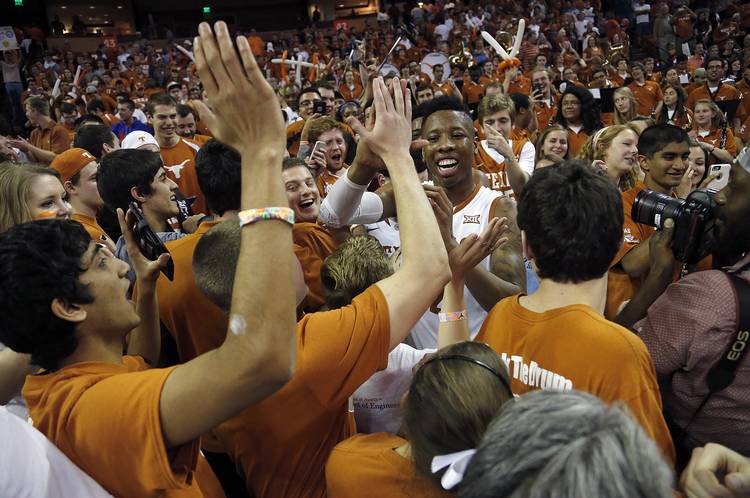 Texas freshman Kerwin Roach celebrates with the fans after the Longhorns defeated the Oklahoma Sooners 76-63 at the Frank Erwin Center on February 27, 2016 in Austin, Texas. (Photo by Chris Covatta/Getty Images)

Texas will have one of the latest tournament starts in the field with the final tip off on Friday in Oklahoma City. The Longhorns will tip against Northern Iowa just after the Texas A&M-UW-Green Bay game, and is the last game of the evening at the site.

For those people who aren’t fortunate enough to see the games live and in person, get ready to tune into TBS, where all the Oklahoma City-based games will be aired.

With dozens of broadcast teams at CBS, TNT, TBS and TruTv’s disposal, you may wonder who is going to be announcing game. Verne Lundquist? Jim Nance? Kevin Harlan? What about the great Gus Johnson?

No. No. No. And sadly not for several years (we miss you Gus).

Blackburn lives in Austin, so he should be familiar with the Longhorns’ season. Meanwhile Gminski is a former Duke Blue Devil and NBA veteran who was the 1979 ACC Player of the Year and All-American.

Serving as the sideline reporter is Maggio, who also works for the NFL Network.

Brackets: How far do Bohls and Golden have Texas advancing in the NCAA tournament?