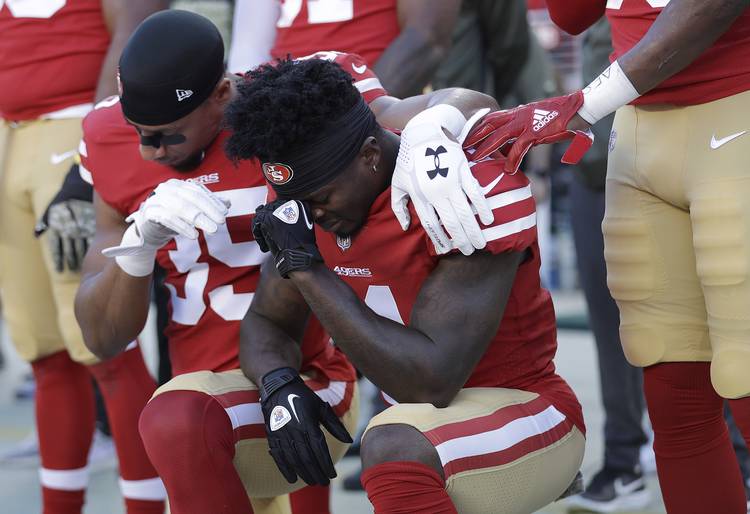 Former Texas Longhorn and current San Francisco 49ers wide receiver Marquise Goodwin crossed the end zone for a touchdown Sunday, hours after he and his wife lost their baby. The baby was born premature and died early that morning after complications, KTVU reported.

He posted the devastating news to his Instagram account, saying, “Unfortunately we lost our baby boy due to some complications, and had to prematurely deliver him early this morning around 4 am. Although we are hurt, I am grateful for the experience and grateful that God blessed me with a wife as courageous and resilient as Morgan. The pain (physically, mentally, & emotionally) that she has endured is unbelievable. Please Pray for the Goodwin family.”

Goodwin’s wife, Morgan, is a former champion hurdler for Texas.

Despite the heartbreaking loss, Goodwin took the field Sunday afternoon and helped his team beat the New York Giants.

Goodwin scored with a 83-yard touchdown pass from C.J. Beathard in the first quarter. Before he crossed the goal line, Goodwin blew a kiss to the sky, then after scoring, he knelt, praying as the team surrounded him, ESPN reported.

He stayed throughout the game, but left quickly after it was done.

Goodwin was one of three NFL players who took a knee to protest during Veterans Day weekend. He joined Eric Reid and the Giants’ Olivier Vernon during the pre-game ceremony.

The NFL Players Association had asked all players to observe a two-minute moment of silence before games to honor veterans. Many players and teams did show support of the military.

Other players who have been kneeling over the past few weeks of the season, were seen standing during the playing of the national anthem.