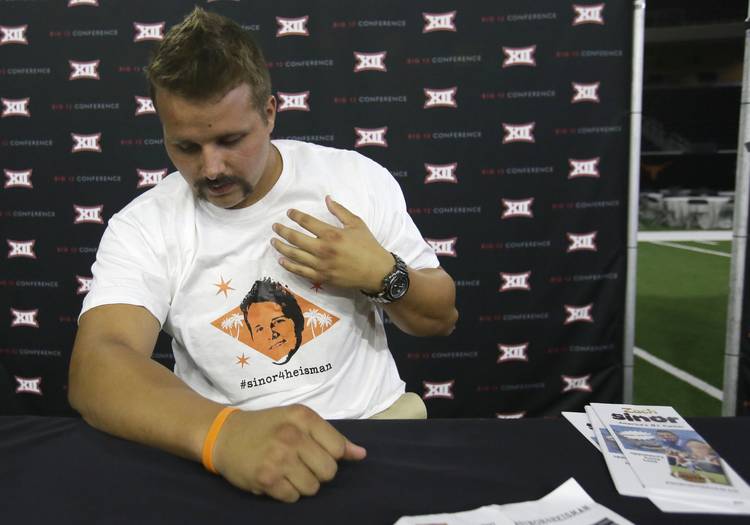 FRISCO — Might one of Oklahoma State’s Cowboys contend for the Heisman Trophy this fall?

Oklahoma State will enter the season with a Heisman candidate in quarterback Mason Rudolph. And Cowboys fans might argue that wide receiver James Washington is a dark horse for the award.

On Tuesday, Oklahoma State’s Zach Sinor attempted to create some buzz for himself.

Sinor, by the way, is a punter. A pure punter has never won the Heisman.

“It all started after the Central Michigan game (last year), a couple people tweeted #SinorforHeisman,” Sinor said. “The media people did a great job and said take off with it, run with it and have fun with it. That’s what I’m doing, I’m going back for my fans.”

On Tuesday, Sinor tweeted out a link to a hastily-constructed website that he developed that morning. He also handed out pamphlets to reporters. The literature — which he printed in Stillwater along with the T-shirt he wore to the media scrum — listed Sinor’s accomplishments alongside the glowing endorsement of “He’s been key for us” from Rudolph.

As for those accomplishments, Sinor averaged 42.8 yards per punt last year. He pinned 35 of his 56 punts inside an opponent’s 20.  Not bad for a player who only started punting as a sophomore in high school and “couldn’t directional punt or pooch punt” when he arrived at Oklahoma State in 2014.

“I never thought I’d be where I am now,” he said. “I knew punting was hard when I started; obviously I wasn’t very good at it. I was just the best one on the team that we had. Coming from a small town (Castroville, Texas), there’s not many punter-specific people.”

Sinor wasn’t the only punter at the Ford Center; fellow junior Michael Dickson was among Texas’ representatives.  Last year, Dickson set a school record with his average of 47.4 yards per punt. He also was a finalist for the Ray Guy Award.

Dickson, though, laughed when asked about his own possible Heisman campaign.

“No, I’ll let (Sinor) do his Heisman stuff,” Dickson said.