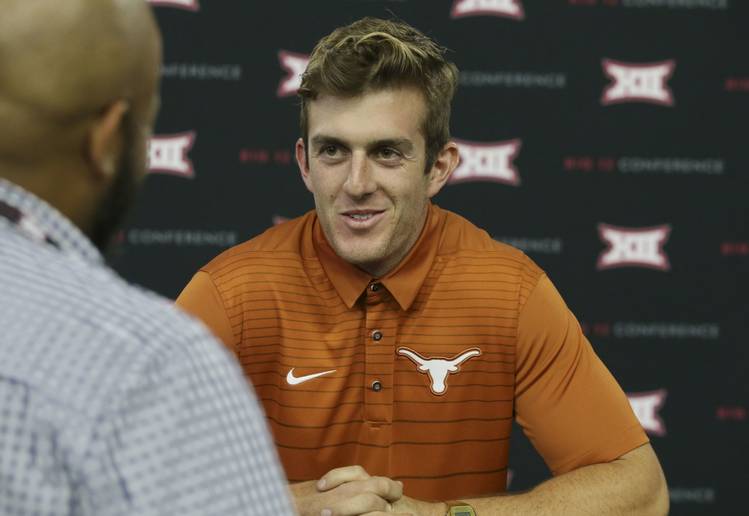 FRISCO — During his time at Texas, junior Michael Dickson has certainly put in the work.

Dickson is coming off a season in which he averaged a school-record 47.4 yards per punt. Dickson punted 142 times during the 2015 and 2016 seasons, and his 77 kicks as a freshman are a school record. Over the past two seasons, only Northwestern’s Hunter Niswander (158 punts), UConn’s Justin Wain (148), Missouri’s Corey Fatony (147), Florida’s Johnny Townsend (147), Hawaii’s Rigoberto Sanchez (144), Northern Illinois’ Jacob Ambrose (144) and Charlotte’s Arthur Hart (143) have punted more than Dickson.

Dickson has said in the past that he would gladly sacrifice playing time. If Dickson isn’t needed on the field, after all, that likely means the Texas offense is succeeding. More time on the sideline, however, would conceivably give Dickson fewer chances to impress those who vote on awards.

At the Big 12 Media Days, Dickson was asked if a punter could earn individual accolades on a successful team. Dickson said it was “definitely doable.” The Australia native argued that the volume and length of punts aren’t the only statistics worth judging.

“If you’re on a good team that gets the ball to a certain point on the field more, you’re going to have a higher percentage of inside-20s,” said Dickson, who landed 28 of last year’s 65 punts inside an opponent’s 20-yard-line. “If you’re on a team that doesn’t get the ball to that certain area of the field and you can’t kick it inside 20 all the time, you’re going to have a bigger (yards-per-kick) average. They calculate it their way to make sure it’s pretty objective.”

Dickson was a finalist for last season’s Ray Guy Award, which is given annually to the nation’s best punter. Texas went 5-7 in 2016. Dickson, though, pointed out that the other two finalists played on Ohio State and Utah teams that earned 21 wins. In fact, only four of the 17 Ray Guy Award winners played for a team with a losing record.

On Second Thought Ep 63: Tom Herman and the Longhorns at Big 12 Media Days