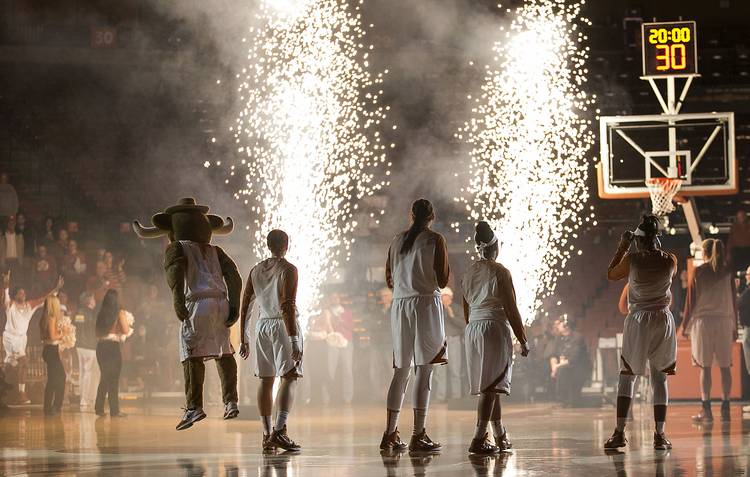 Texas' Nneka Enemkpali (3) is introduced with fireworks as the rest of the starters look on before action against Western Virginia held at the University of Texas in Austin, Texas, on Wednesday, Jan. 7, 2014. (RODOLFO GONZALEZ / AMERICAN-STATESMAN)

Felisa Israel, a consultant hired by former Texas athletic director Steve Patterson to overhaul the game presentation at UT athletic events, will no longer be working with the Longhorns.

It’s unclear whether current athletic director Mike Perrin or marketing officials made the decision to terminate her contract. Israel, who said her goodbyes to UT staffers over the weekend, said she was “especially proud of the staff. I truly am, with every part of my being.”

Israel, who was profiled by the American-Statesman last February, was hired to energize the environment at Royal-Memorial Stadium and the Erwin Center. Inside the basketball arena, Israel added DJs, pyrotechnics, new in-game contests and convinced UT officials to buy a $7,500 disco mirror ball to hang in the rafters.

“I am so proud of the growth, the culture change and the way the fans embraced and responded to everything that we put out for them,” Israel said.