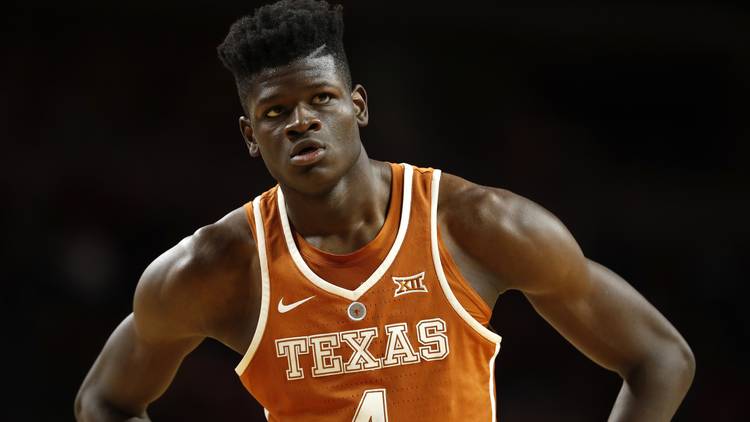 Mo Bamba had maybe his most complete game of the season Monday when he tore down the rim with 12 rebounds and 24 points, mostly off dunks, although he sank a pair of three-pointers. The Texas freshman said he draws motivation from Kevin Durant and they talk “bi-weekly.” He got a pep talk two days ago from former Longhorn Myles Turner, now with the Pacers. Bamba points out both are accurate from long distance, gushing, “Yeah, I don’t know what Texas is doing with its bigs. Can I be like that? Absolutely. Maybe I’ll be Kevin Durant 2.0.” … Bamba said he loves watching “the Rick Mahorns of the world” and that he wants to improve his leadership and his ability to dominate play, “even without the ball. I want to take complete control of the game.” … He loves listening to experts’ insights into his shooting ability and said he’s dealt with hecklers as well. “What do I do? I smile at ‘em,” he said. “One guy at Oklahoma State yelled that I cheated on the SAT. I looked around and said, ‘I took the ACT.’ “

Recruiting season has two weeks left, and Texas appears locked in with the No. 3 national class after signing 19 in December. Ohio State and Georgia lead comfortably with the top-two classes, and American-Statesman recruiting guru Mike Craven said, “I’m not sure there are enough five-star type prospects left on the board to catapult the Longhorns into a top-two spot. I do expect the Longhorns to close with a pair of four-star prospects and sign around 27 in the class, so it would take a big push by Oklahoma, Alabama or Penn State to push Texas from the third spot.” The most recent, out-of-state commitments came from defensive ends who fit Todd Orlando’s scheme but aren’t considered to be elite prospects. Craven says Daniel Carson and Michael Williams — out of Baton Rouge, La. — are “in the Charles Omenihu/Malcolm Roach mold. The two filled a need, but neither is ready to play from day one.” Running back Keaontay Ingram said he would have signed with Texas in the early period if Carthage hadn’t been playing for a state title. Keondre Coburn, the Spring Westfield defensive tackle, remains a bigger concern. “Texas is still the clear favorite, but he’s taking visits and listening to other schools,” Craven said. Craven also said to keep an eye on DaShaun White, a linebacker from North Richland Hills, who committed to Oklahoma but hasn’t signed yet, and Manvel wide receiver Jalen Preston, a Texas A&M pledge who will visit Texas.