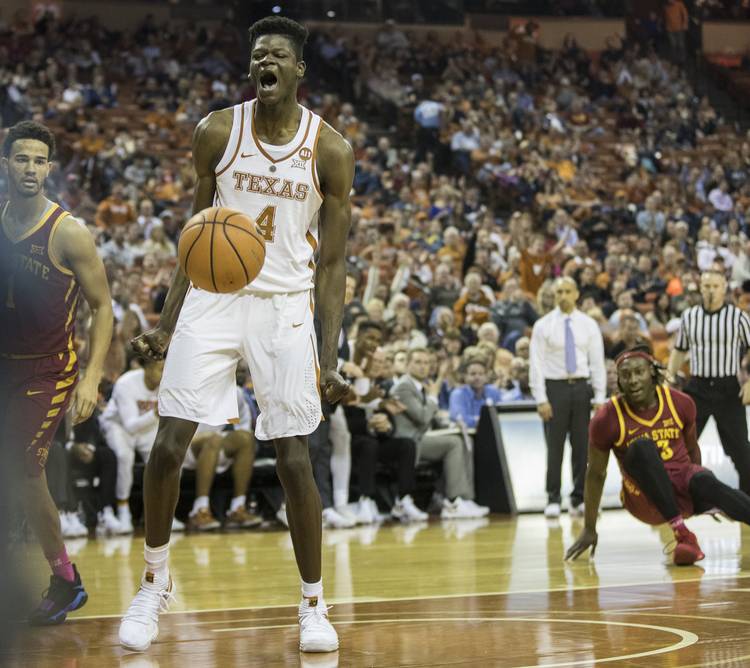 Enjoy Mo Bamba while you can

What we’ve witnessed over the last 10 games is a sneak preview of what Mo Bamba will be doing for millions on the next level.

Enjoy him while you can. The freshman center is just scratching the surface of his immense potential. Beat writer Brian Davis asked him after Saturday’s win over Ole Miss if this is evidence of him putting down the proverbial hammer. Yes, was the answer.

“The biggest thing is the game has slowed down for me initially,” Bamba said. “The coaches said they weren’t really expecting me to play as well there early on. I had to get a feel for the game. College is night-and-day different from high school.”

More impressive is that the recent surge has come against all but two Big 12 opponents.

Wednesday’s road test against Texas Tech could be another stats bonanza, given that the Red Raiders play a small lineup. Bamba scored 15 points and grabbed 11 rebounds in the first meeting. Coach Shaka Smart says he expects a tougher brand of defense against his star moving forward.

Brooke McCarty can drive the Longhorns to success

The Texas women rebounded from the Baylor embarrassment with a 32-point drubbing of Iowa State, but the heart and soul of the team — senior point guard Brooke McCarty — continues to struggle with her shooting.

On Monday, McCarty was named a top-10 finalist for the prestigious Nancy Lieberman Award — presented annually to the nation’s top point guard — but she hasn’t yet found the consistent shooting stroke that made her one of the most intriguing stories of last season. The reigning Big 12 player of year is shooting at a .234 clip from three-point range over her last 10 games. She started 1 of 8 against Baylor before making a couple of 3s late in the game after the issue had long been decided.

McCarty is a fighter, and that’s why coach Karen Aston isn’t pushing any panic buttons.

“It’s part of the process of being a point guard,” Aston said. Then later, “If you play the game long enough, you’re going to run into a snag at some point.”

McCarty has done a fine job of running the offense, but the Horns aren’t nearly as scary right now with her missing jumpers and those sneaky runners. This team is still talented enough to get wins while she struggles, but it won’t go special places if she isn’t knocking down bombs at money time the way she did last season.

For the rest of Cedric’s Nuggets, including his thoughts on the Pro Bowl and the Australian Open’s favoritism, click here.