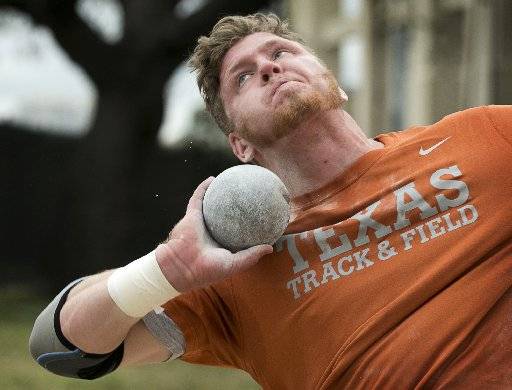 The Texas women’s 4×400 meter relay team posted the fourth fastest collegiate time ever recorded and the men’s 4×400 team broke a school record at the Tyson Invitational on Saturday in Fayetteville, Ark.

While the 4×400 relay teams were breaking records in Arkansas, UT’s Ryan Crouser broke his own school record in the shot put at the Husker Invitational in Seattle.

Texas led the entire race and finished almost a second ahead of Southern Cal. Akinosun ran the anchor leg in 50.59 seconds, topping her personal best of 50.77 set at the Power Five Invitational earlier this year.

“To me there’s still another gear there. I know Courtney split 50.59 today, but you see her finish up healthy and walk off the track like it’s nothing,” said Texas coach Mario Sategna.

“To break the school record by two seconds and have the No. 1 time in the country, that’s been a long time coming,” Sategna said.

Crouser topped his school record with a with a 21.28 meters heave, the farthest collegiate throw this season.

“This performance continues to demonstrate that Ryan is one of the best shot putters in the world,” said Assistant Coach Ty Sevin.