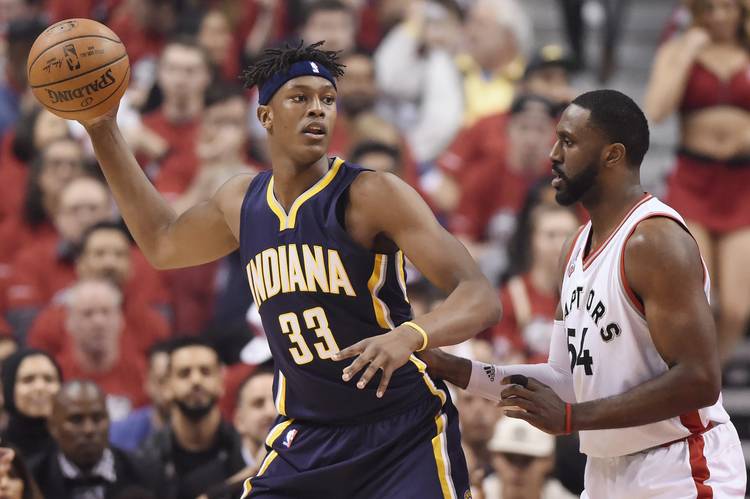 Indiana Pacers forward Myles Turner, left, looks to pass as Toronto Raptors forward Patrick Patterson defends during the first half of Game 7 of round one NBA playoff basketball action in Toronto on Sunday, May 1, 2016. (Frank Gunn/The Canadian Press via AP)

Former Texas standout and 2015 NBA first round pick Myles Turner is one of 25 players who will compete for a spot on the Men’s Select Team. The squad will compete against and train with Team USA as the Rio Summer Olympic games approach.

Turner had a strong rookie campaign for the Indiana Pacers this past season and earned second team all-rookie honors. He averaged 10.3 points and 5.5 rebounds in his first season for the Pacers, who made the playoffs. In his lone season in Austin, Turner was named Big 12 Freshman of the Year.

The forward joins a list of young NBA players and several soon-to-be drafted players, including Boston’s Marcus Smart (Oklahoma State), who is the only other Big 12 alum selected to the team. Turner was a member of Team USA’s FIBA Americas U18 Championship team in 2014.

The Men’s Select Team will compete against Team USA in July just before the August summer games. Former Longhorn and current NBA superstar Kevin Durant is currently on team USA’s roster, but the final team roster won’t be announced until late July. Over the weekend a number of players, including the Houston Rockets’ Jame Hardin, Durant’s teammate Russell Westbrook and NBA MVP  Stephen Curry  announced they will not be competing for a spot on the Olympics team.