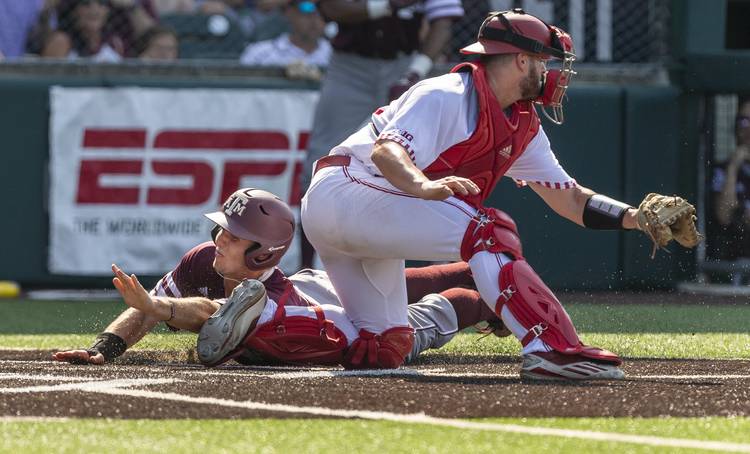 On Friday, Texas A&M did its part.

Fueled by a seven-run fourth inning and a spectacular start from John Doxakis, Texas A&M coasted to a 10-3 win over Indiana at UFCU Disch-Falk Field. The seven-run victory was recorded in the opening game of an NCAA regional hosted by Texas.

When asked on Thursday why he was starting Doxakis against Indiana, Texas A&M coach Rob Childress said “he’s our hot hand.” Doxakis had been dealt losses in four of his previous five appearances, but he was coming off starts against South Carolina and Auburn in which he allowed two earned runs over 13 innings.

On Friday, Doxakis struck out seven of the first eight batters he faced. Doxakis surrendered his only hit in the fourth inning and the lone run scored against him was unearned. In six innings, the sophomore southpaw issued two walks and tallied a career-high 12 strikeouts.

After catching a Hoosier with a pick-off attempt, Doxakis had faced the minimum through three innings. That feat was matched by Indiana starter Jonathan Stiever, who erased his only blemish — a second-inning single by Logan Foster — with a double play.

Stiever, who is projected as an early-round pick in next week’s MLB Draft, did not fare as well with his second look at Texas A&M’s batting order.

Texas A&M sent 11 batters to the plate in the fourth inning. Leadoff hitter Zach DeLoach collected two hits in the inning — one of which was a three-run double — and Foster and Will Frizzell added RBI hits. Aggie infielder George Janca, who hails from nearby Georgetown, also drew a bases-loaded walk.

“It is probably most of it on myself, not being able to get ahead in the count and when I was able to make quality pitches they were able to take advantage in those scenarios,” said Stiever, who lasted 3 2/3 innings. “Give them credit but I am more frustrated with myself in those scenarios.”

Despite boasting the nation’s fifth-best ERA, Indiana surrendered a season-high number of runs to the Aggies. Luke Miller hit two solo homers for the Hoosiers, but he and his teammates struck out 17 times. Indiana (38-19) will attempt to stave off elimination against either Texas or Texas Southern on Saturday afternoon.