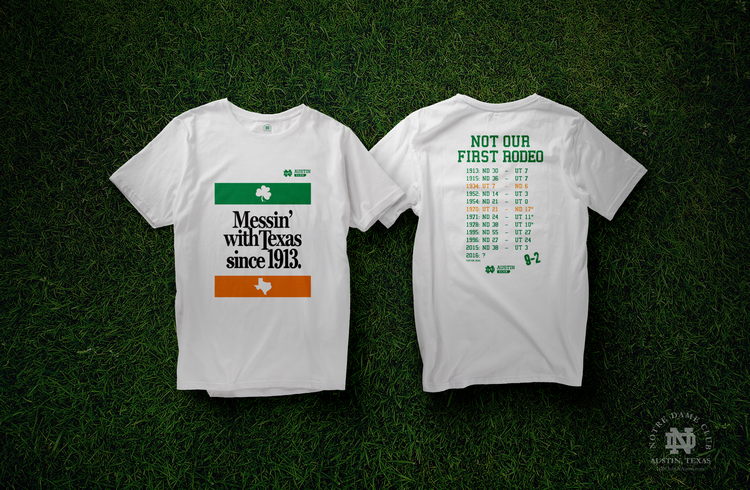 "Messin' with Texas since 1913," reads the T-shirts that are being sold by the Notre Dame Club of Austin. There already have been 400 sold; the club is ordering three times that many. (HANDOUT PHOTO)

The Golden Domers are talking smack. Or wearing it.

The Notre Dame Club of Austin, which has a mailing list of about 1,600, is hawking T-shirts that say “Messin’ with Texas since 1913” and touting the Irish’s 9-2 record against the Longhorns. They’ve already sold 400 and are re-ordering three times that many.

“We may be Golden Domers,” said Andrew Barlow, Notre Dame class of 1988 and an executive communications consultant in Austin, “but we we’re Austinites with a healthy respect for UT’s tradition and program, so we wanted a playful way to share our excitement for the game and raise money for our club’s scholarship fund. It’s not trash talk; it’s good-natured ribbing between athletic and academic peers.”

Yeah, good-natured if you came out on top 38-3 last year.

While I got ya, here are some other of my nine things and one crazy prediction for this week.