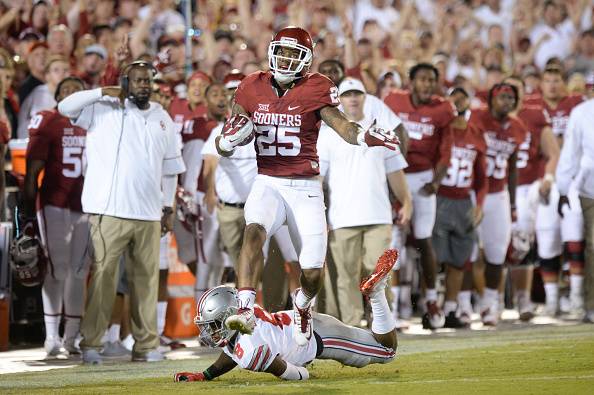 NORMAN, OK - SEPTEMBER 17: Joe Mixon #25 of the Oklahoma Sooners runs past Gareon Conley #8 of the Ohio State Buckeyes on his way to a 97-yard kickoff return for a touchdown at Gaylord Family Oklahoma Memorial Stadium on September 17, 2016 in Norman, Oklahoma. (Photo by Joshua Gateley/Getty Images)

Joe Mixon, who is in Oklahoma’s tailback rotation with Samaje Perine, was recognized Monday as one of the country’s most versatile players by the Paul Hornung Awards committee

And he truly is.

Mixon’s running, catching, blocking and return game was key in the Sooners’ 52-46 victory on the road against TCU.

The committee says of Mixon:

He “racked up 221 all-purpose yards in the Sooners’ 52-46 road win over TCU. He touched the ball 27 times four different ways: 16 carries for 105 yards and a touchdown, five receptions for 70 yards, two kickoff returns for 46 yards and four fair catches on punts. Mixon had three consecutive touches that led to a third quarter score: he fair caught a punt at the Sooners’ 33-yard line, ran the ball 65 yards to the TCU two yard line then scored on a 2-yard run. OU is 1-0 in the conference and 2-2 on the season.”

Mixon leads the Sooners in rushing with 364 yards. And his blocking drew the ire of TCU coach Gary Patterson, who complained about how “No. 25” had ability to tackle without getting called for holding.