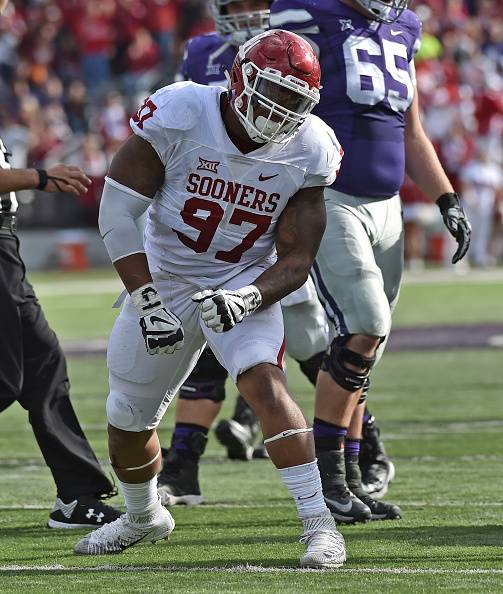 MANHATTAN, KS - OCTOBER 17: of the Oklahoma Sooners of the Kansas State Wildcats during the first half on October 17, 2015 at Bill Snyder Family Stadium in Manhattan, Kansas. (Photo by Peter G. Aiken/Getty Images) *** Local Caption ***

Charles Walker, one of Oklahoma’s top defenders, will not play Saturday against Texas.

Walker, an end, suffered a concussion during the Sooners 52-46 road victory last Saturday over TCU. Before his injury, he’d posted his best game of the season, deflecting two passes thrown by Horned Frog quarterback Kenny Hill.

“Charles is a really good player,” Stoops said Monday during his weekly press luncheon.”I thought (he) had one of his better games. He’s an active guy, he’s very talented, has got a lot of size, quickness to him, and it’s good to see him get that big reach up there and knock a few balls down.”

Walker has dealt with concussions in the past. A concussion forced Walker out of the national semifinal game against Clemson last year.  He’s projected as one of the Big 12’s top prospects for next year’s NFL draft if he decided to leave school early.

Earlier this week, Stoops announced that starting linebacker Tay Evans was retiring from football because of concussions.

Can Buechele match Applewhite, McCoy and Heard in first start against OU?