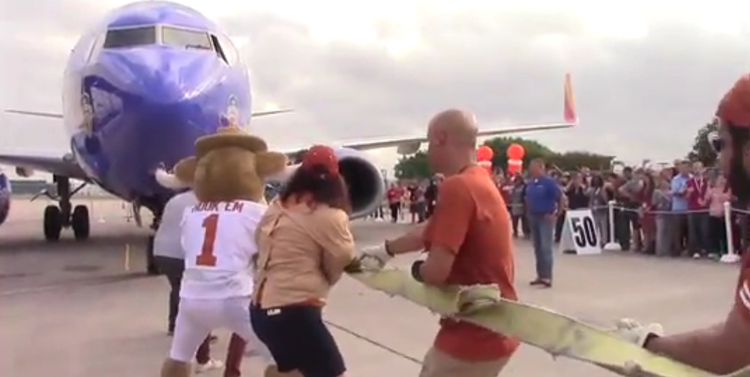 Texas and Oklahoma faced off in a very serious competition on Thursday morning.

How does it work? The five-person team that can pull an 83,000-pound Boeing 737 plane 50 yards the fastest is declared the winner, and they get bragging rights going into the big rivalry game this weekend.

RELATED: Can Buechele match Applewhite, McCoy and Heard in first start against OU?

The Fort Worth Star-Telegram was there to capture the face-off, and the video’s pretty great, especially the tense moment when a Texas plane-puller takes a tumble. Don’t worry, though, he wasn’t hurt and it didn’t affect the Texas team’s performance — they beat the OU team by less than a second.

Is a Texas plane-pulling victory a good omen for the Longhorns on Saturday? Only time will tell, but according to the Star-Telegram, only once in plane-pulling history have the winners had their football team go on to win the big game.