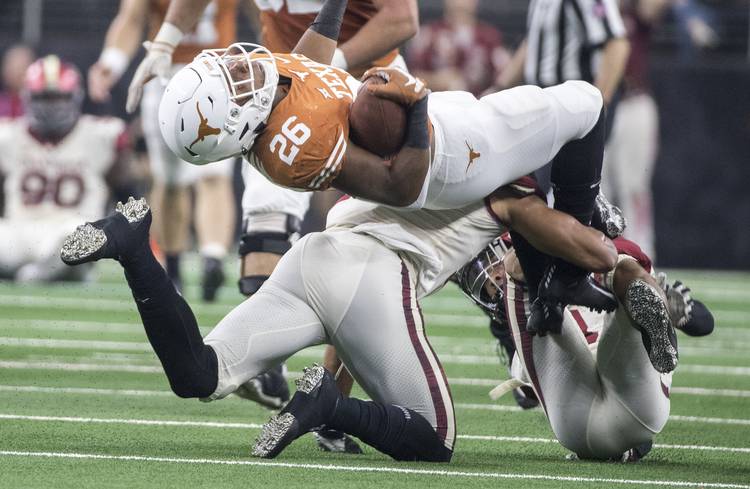 It’s all over at AT&T Stadium in Arlington. Fifth-ranked Oklahoma, needing a win over Texas to (a) help ensure a College Football Playoff bid and (b) make up for their only loss of the season — the Longhorns’ 48-45 thriller at the Cotton Bowl in October — has won the Big 12 championship with a 39-27 win.

This game was deadlocked 27-27 entering the final quarter, but the Sooners prevailed thanks to a big safety with eight-and-a-half minutes left followed by a clock-eating touchdown drive against what looked like a gassed Longhorns defense.

What this means for Texas

Many thought the Longhorns would end up at the Sugar Bowl regardless of a win or a loss in Arlington. And that they at least needed to avoid looking bad in a loss to secure a spot in New Orleans on New Year’s Day. They’ll find out for sure on Sunday.

What this means for Oklahoma

Most likely, another CFP invitation to join (again, likely) Alabama, Clemson and Notre Dame in the Final Four. The Sooners still need the Crimson Tide to take care of Georgia on Saturday night and then hope the CFP selection committee doesn’t get too enamored with Ohio State’s win over Michigan last week and likely Big Ten title game win over Northwestern.

More fourth quarter issues. The Longhorns, who had been outscored by 67 points in the final quarter heading into Saturday, gave up a field goal, safety and touchdown. This one turned on a safety with 8:27 left, turning a 30-27 game into a 32-27 Sooners advantage. Texas never rebounded — the Sooners followed that safety with a methodical touchdown drive that took 6:19 off the clock, Lil’Jordan Humphrey’s 92-yard kickoff return for a touchdown was called back by a holding penalty, Collin Johnson couldn’t secure a touchdown catch with a minute left and Sam Ehlinger was picked off with 51 seconds to go. Losing Caden Sterns for the second half didn’t help. Those 13 penalties absolutely hurt — it was the most penalties the Horns have committed in a game since 2015.

Kyler Murray, who had a big statistical day against the Longhorns in October, had an even bigger statistical day Saturday. The Sooners won it in the fourth quarter despite the loss of star wide receiver Marquise Brown, who was lost on the final play of the third quarter and was carted off; he ended up watching the end on crutches. But it was that long drive after the safety that sealed the win; OU had eight runs and two critical third-down pass conversions to keep it going.

And speaking of facemask penalties, Breckyn Hager’s 15-yarder on OU’s final drive of the first half helped the Sooners take a 20-14 lead at the break. And Josh Thompson’s holding call on Humphrey’s kickoff return took away the chance to make this an interesting ending.

Humphrey watch: Two Texas weapons that took more than a half to heat up — Lil’Jordan Humphrey and Keontay Ingram. Humphrey, who had 9 catches for 133 yards in the October game, had only four first-half targets and didn’t make a significant play until midway through the third quarter. He did catch a touchdown pass later in that drive, however. He finished with seven catches for 51 yards and the score on 10 targets.

Ingram gave way to Tre Watson for most of the game. Neither did much. Watson had 39 yards on 13 carries, Ingram had only 7 yards on four totes.

A big day for CJ: Johnson was Texas’ go-to in the passing game. He and Ehlinger looked connected on the opening drive, hooking up for a 32-yard gain. Johnson added a 31-yarder later in the half and made a beautiful grab on a 27-yard touchdown that came at a critical point — Texas trailing, 27-14. It cut the Sooners’ lead to 27-21 with 8:47 left in the quarter.

Texas drives: The Horns had 10 of them — they went for TD, punt, TD, punt and punt in the first half, then TD, TD, punt, safety and interception in the second.

Dicker missed his first extra-point kick of the season when his third-quarter effort was deflected at the line of scrimmage; it bounced off the cross bar high into the air. He had been 49 of 49 up till then, and it put the game at 27-27 with 2:44 left in the third. … The Horns snapped a 25-game Oklahoma streak of scoring a touchdown in the first quarter; the Sooners managed only a field goal today.

This was the first time Texas and OU have played each other twice in the same season since 1903, when the Horns and Sooners tied in their first meeting and Texas took the rematch. Texas leads the overall series 62-46-5.

A bowl game. The Longhorns finish at 9-4 and Big 12 runners-up. Speculation is that Texas will get a New Year’s Six invitation to the Sugar Bowl, probably against an SEC opponent. Texas needs OU to get into the CFP and not find its way into the Sugar Bowl as an at-large team. We’ll find out on Sunday.