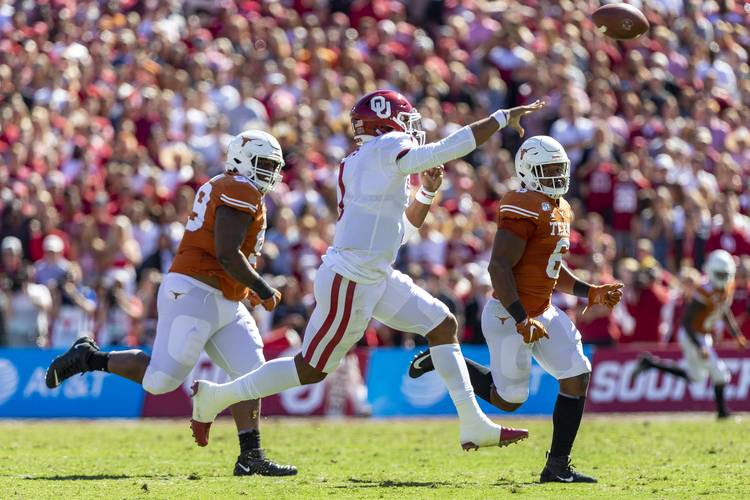 Red River Showdown? More like a Red River Reversal. Heading into this game, we figured the Longhorns’ offense would be fine against an Oklahoma defense that was gashed throughout 2018 and is working with a new coordinator. And we wondered how Todd Orlando’s limping defense could possibly stop Heisman Trophy candidate Jalen Hurts and probable first-round wide receiver CeeDee Lamb. Turns out, the Sooners stymied the Texas offense for the first half, sacked Sam Ehlinger nine times and Texas’ defense kept this game as close as it was.

Most likely, we’ll do this all again in December.

The offense spent the first half in a real funk. A 10-3 halftime deficit easily could have been more along the lines of 21-3. Roschon Johnson provided some juice in the running game, but not until the second half. Sam Ehlinger was sacked nine times and the defense, which came up big throughout the day, looked tired in the fourth quarter. The Longhorns never led at any point.

The Sooners won the line of scrimmage. How long has it been since Texas gave up nine sacks — even during its recent down years? Lamb is as good as we thought he’d be (10 catches for 171 yards, 3 TDs). It was a strong performance for the Sooners, who had jumped out to a 5-0 start without really playing anyone of note. This game answered some questions.

What this loss means for Texas

Big picture: The Longhorns are one year away. The offensive line needs seasoning. Texas needs to figure out who its alpha running back is. Those freshmen receivers will learn from this game. And the defense needs to grow from a unit loaded with talent into a unit led by playmakers.

This season: Any hopes for a CFP berth are gone. A two-loss Texas won’t earn an invitation even if the Horns win out and take the Big 12 championship game rematch over this same Oklahoma team. And Ehlinger needed a huge game to vault him into the Heisman Trophy conversation. He now has lost his two high-profie matchups with LSU and OU and looked rough today. So bump any Heisman talk to 2020. But a Big 12 title is still in play.

For OU, the undefeated Sooners can crack the AP’s top five given Georgia loss on Saturday. Hurts (16 of 27 for 235 yards, 3 TDs, 1 interception, 131 rushing yards and a rushing TD) didn’t hurt his chances. Right now, Oklahoma certainly looks like it’s headed toward a third straight CFP berth.

1.  In the Ehlinger vs. Hurts matchup, which had all sorts of implications from the Big 12 to the Heisman, Hurts came out on top. Easily. Hurts made two big mistakes that cost the Sooners points, but also produced four touchdowns and had 366 yards of total offense.

2. A very long day for the offensive line. Nine sacks! And most of them came at the worst times, like on third downs.

4. Another strong day for D’Shawn Jamison. He had the two big picks in Morgantown and recovered a fumble and nearly picked off Hurts in the end zone today.

5. OU scored 34 points and had 511 yards of offense, but it was a gusty performance for Texas’ defense, which came up with two key turnovers in the red zone and pressured Hurts into bad decisions on third downs several times.

In four red zone trips today, the Sooners had one touchdown, two field goals and a turnover.

Horns up: A blitzing DeMarvion Overshown forced a punt on OU’s first drive of the second half, forcing Hurts into a bad pass. … After Collin Johnson left, Malcolm Epps made some plays.

Next up for Texas: Kansas

It’s halftime at the Cotton Bowl, and Texas is trailing Oklahoma 10-3