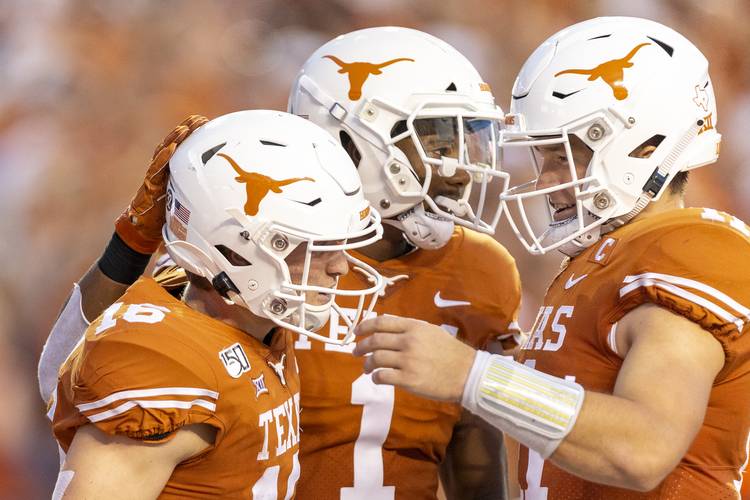 It’s all over at Royal-Memorial Stadium. Twelfth-ranked Texas, which was a 6-point favorite tonight, has beaten Oklahoma State 36-30.

Those who were expecting a Sam Ehlinger vs. Chuba Hubbard/Tylan Wallace shootout really only got the Sam Ehlinger part. Texas shut down the nation’s top running back and wide receiver in the first half and overcame some special teams miscues to hold on in the second half.

Defense. Yes, the Cowboys finished with nearly 500 total yards, but Chuba Hubbard (37-121-2) and Tylan Wallace (5-83) were largely held in check, there were two goal-line stands and Montrell Estell and Chris Brown had big interceptions, one leading to a first-half touchdown and the other snuffing out OSU’s comeback hopes. Sam Ehlinger had a 300-yard night of total yards and threw four touchdowns and Keaontay Ingram became UT’s first 100-yard rusher of the season.

Remember when Texas hurt itself by not converting those fourth-and-goals against LSU? That was the Cowboys’ problem tonight: They had to settle for two field goals on drives that got to UT’s 1- and 3-yard line. The defense was susceptible in the middle, both in Texas’ running and passing game. And we’re still trying to figure out Mike Gundy’s fake field goal call in the fourth quarter.

Lots. It snapped a string of four straight Oklahoma State wins in this series. It snapped a five-game home losing streak to the Cowboys at DKR. And it gives the Longhorns some wind behind their backs as they enter this off week with a chance to get healthy.

1. Derek Warehime should be one busy guy during the off week. The special teams coordinator has to figure out what went wrong with UT’s punt return game. Jake Smith muffed a punt late in the first half that led to an Oklahoma State touchdown. And after it looked like the game was pretty much put away in the final minutes of the game, Brandon Jones couldn’t handle a sliding return that gave OSU, trailing by 13, the ball in UT territory. The Cowboys turned that into a touchdown too, to make it 36-30. And an earlier punt touched Byron Vaughns as he raced downfield on coverage; the Horns recovered that one, though.

2. Hubbard entered this game as the nation’s top rusher. The Horns stuffed him in the first half, plugging the middle and getting nice run support from the likes of Brandon Jones and Caden Sterns when he went outside. He finished with 121 yards, but averaged only 3.3 yards per carry.

On perhaps the play of the game — after a review upheld the on-field call that Spencer Sanders had gone out of bounds just short of a first down, OSU had a fourth-and-1 at Texas’ 3-yard line. Hubbard tripped over his own lineman and the Horns took over.

It was Texas’ second goal-line stand of the night.

3. Runner-up for play of the game — OSU, after picking off Ehlinger, drove to Texas’ 22, trailing 28-23. On fourth-and-1, the Cowboys lined up for a 39-yard field goal to cut it to 28-26. But they were flagged for delay of game, making it a fourth-and-6 at the 27. And Mike Gundy called a fake; Jake McClure, the holder, tried a shovel pass to Jelani Woods but it fell incomplete.

4. Remember how Tylan Wallace shredded the secondary last year in Stillwater? He was held to only three catches on three targets in the first half. He finished five catches for 83 yards and no scores.

Breaking down his eight targets:

5.  For the second straight game, Collin Johnson was held out with a sore hamstring. Ehlinger took three deep shots to Malcolm Epps, who started in Johnson’s place, but couldn’t connect with him either time. Epps finished with one catch for 6 yards.

Not surprisingly, Duvernay dominated the stat sheet. He had 12 catches for 108 yards and a touchdown; all other UT pass-catchers combined for 8 grabs.

6. Ehlinger was 20 of 28 for 281 yards and 4 TDs. He threw his first interception of the night when Rodarius Williams tipped a throw over the middle that was secured by safety Kolby Harvell-Peel, who returned it 22 yards to Texas’ 31.

The 73-yard touchdown pass to Brennan Eagles in the second quarter was Ehlinger’s longest TD pass in his career.

How Ehlinger’s night compared to other notable QBs around the country this week:

7. With threats like Wallace and Dillon Stoner, it was a bad night for Texas to experience defensive back injuries. B.J. Foster and DeMarvion Overshown already were out with injuries and the Horns lost starting cornerback Jalen Green — he’d drawn most of the coverage assignments on Wallace — near the end of the first half. He wasn’t even on the field at the start of the third quarter. And Caden Sterns, who’s leading the team in tackles, got shaken up on OSU’s first drive of the second half. He returned, but was shaken up again in the fourth quarter. D’Shawn Jamison also left earlier in the fourth quarter.

8. Shout-out to Chris Adimora. The freshman defensive back came up with two important plays in the final two minutes — a pass breakup in the end zone and a recovery of OSU’s onside kick with 1:29 left.

9. The crowd got chippy on the opening drive of the third quarter. Ingram got gang-tackled to the ground, but there was no personal foul called. But in the first half, Malcolm Roach was flagged for the same play. And then, on the very next play, boos were heard when Ehlinger’s third-down pass to Eagles went incomplete without a pass interference call. But both those sets of boos paled in comparison to the reaction on Joseph Ossai’s roughing-the-passer penalty in the third quarter; he also was called for targeting, though that was reversed after a review. So Ossai remained in the game.

Texas at West Virginia, Oct. 5, time/TV yet to be announced

The Horns are off next weekend. Other Big 12 games — Texas Tech at No. 5 Oklahoma, Kansas at No. 25 (but not for long) TCU, Iowa State at Baylor and Kansas State at Oklahoma State.