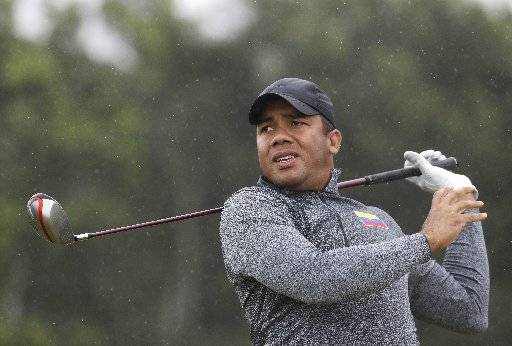 Jhonattan Vegas of Venezuela drives off the third tee during the second round of the men's golf event at the 2016 Summer Olympics in Rio de Janeiro, Brazil, Friday, Aug. 12, 2016. (AP Photo/Chris Carlson)

Former Texas golfers Jhonattan Vegas and Brandon Stone carded their best rounds so far at the Rio Games on Saturday, shooting even-par 71s in the third round.

Stone is in 50th place at 5 over par, and Vegas is tied for 51st place at 6 over. Great Britain’s Justin Rose is in the lead at 12 under par heading into the final round. British Open champ Henrik Stenson is a shot behind Rose, and Australia’s Marcus Fraser is in third place at 9 under. Team USA’s Bubba Watson is tied for fourth at 6 under.

Vegas, representing Venezuela, was at even par though the front nine. He birdied the 10th hole but double-bogeyed the par-4 13th. He made a birdie on the par-3 17th to get back to even par.

South Africa’s Stone shot 1 under on the front nine and had two bogeys and a birdie on the back nine.

Bohls: Buechele, Swoopes both to play vs. Notre Dame