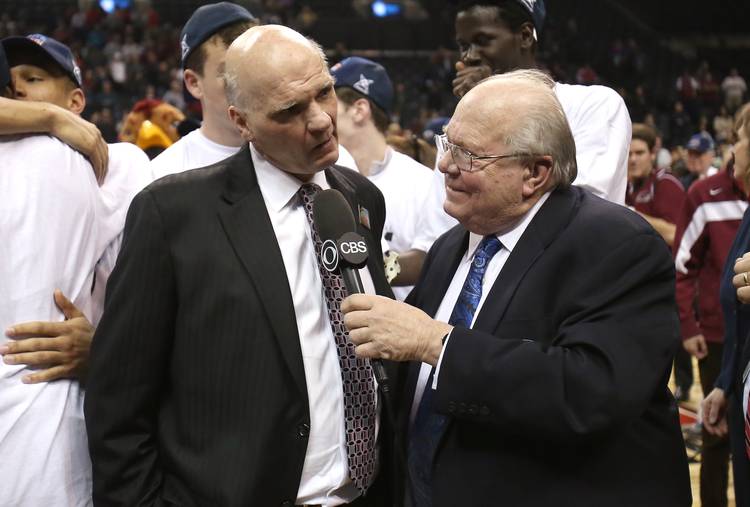 Head coach Phil Martelli of the Saint Joseph's Hawks is interviewed by Verne Lundquist of CBS after defeating the Virginia Commonwealth Rams during the Championship game of the 2014 Atlantic 10 Men's Basketball Tournament at Barclays Center on March 16, 2014 in the Brooklyn borough of New York City. The Hawks beat the Rams 65-61. (Photo by Mike Lawrie/Getty Images)

Advertisement
Hall of Fame broadcaster Verne Lundquist joins Cedric Golden and Kirk Bohls for Episode 37 of the “On Second Thought” podcast. Lundquist, an Austin High grad, remembers his greatest moments of a career that spanned six decades, including Jack Nicklaus winning the 1986 Masters, Tiger Woods’  chip shot on No. 16 at The Masters, and Auburn’s “kick-six” that beat Alabama in the 2013 Iron Bowl. Plus, the three movies he appeared in and the residual checks he gets each month.
Also, Ced and Kirk discuss Texas basketball’s struggles, address Baylor’s new hire and make their weekly football picks.

Breakfast with Bevo: Will a Texas player hear the words ‘And the winner is …’?