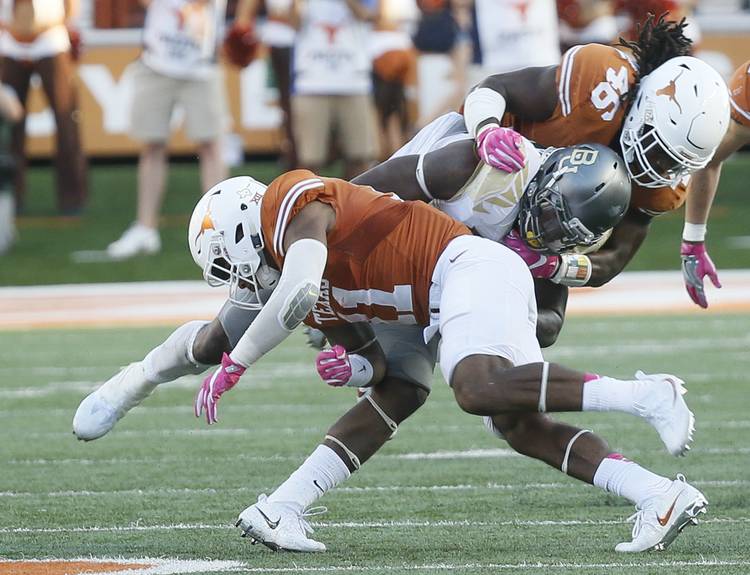 Sophomore P.J. Locke was all over the place against Baylor. In this conference, you need a good nickel back to guard the slot, and Locke has ball hawk written all over him. Texas Tech has killed teams with crossing routes and short passes over the years, so I’ll be really interested to see how Locke fares in his first trip to Lubbock. After coming up with a fumble recovery and an interception against Baylor, Locke was definitely the start of the secondary. I asked him if he was ready for 88 passes from Patrick Mahomes. “We’re up for 88,” he answered. Love it.

As much as sportswriters crave actual honesty from those we cover, coaches absolutely hate it. A quick story from 2004. I couldn’t believe my ears when Oklahoma’s Larry Birdine called USC “an average team” in the runup to the 2004 BCS championship game. “I feel like they’re, I’d say, a one-and-a-half-man team,” Birdine said. Needless to say, OU coach Bob Stoops was apoplectic. The Trojans stomped the Sooners, 55-19. I imagine that’s how Charlie Strong felt on Monday after hearing about Breckyn Hager’s comments about wanting to injure Texas Tech’s Patrick Mahomes. Texas issued all the necessary apologies. Hager had no real malicious intent, but it sounds bad just the same. Birdine couldn’t back it up; Hager better hope he does.

Texas football is back … on the road. The Horns are 0-4 in games played away from Austin, but you, the players or Charlie Strong didn’t need me to say that. The Longhorns temporarily quieted their haters with the upset of Baylor, and the critics will have less to say if Texas slows down the Red Raiders’ explosive offense in Lubbock. It’s quite conceivable that Texas goes 6-0 at home this season, but it won’t mean much if the team can’t pick up a quality victory on the road.

Charlie Strong gave a glimpse of his defensive blueprint in the win over Baylor, and I’d be shocked to see him deviate from the script against pass-happy Texas Tech. The Texas head coach was all blitz all the time against the Bears with a pressure philosophy that resulted in six sacks, giving Texas 16 sacks over the last three games alone. The design calls for tight coverage in man-to-man defense behind the front, so the onus will be on rising stars Kris Boyd and P.J. Locke in the secondary.