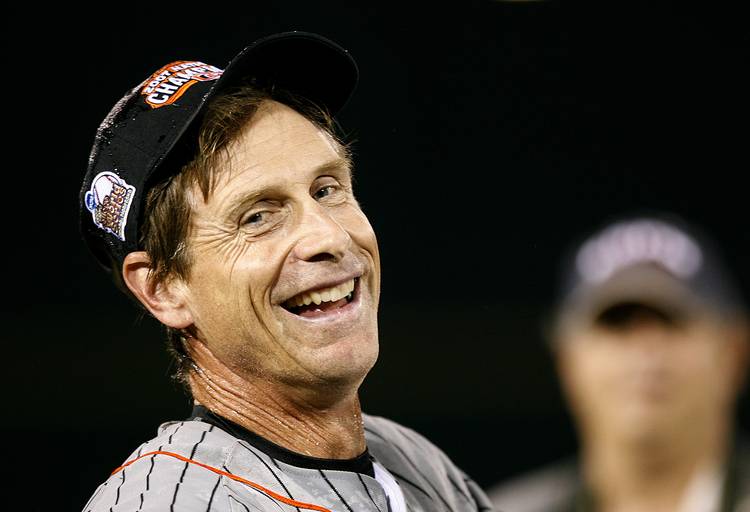 Head coach Pat Casey #5 of the Oregon State Beavers reacts after getting doused with water following his team's 9-3 win over the North Carolina Tar Heels to claim a second straight NCAA Championship in Game 2 of the NCAA College World Series Championship at Rosenblatt Stadium on June 24, 2007 in Omaha, Nebraska. (Photo by Kevin C. Cox/Getty Images)

Texas officials interviewed Oregon State’s Pat Casey, but the two-time NCAA champion coach rebuffed a contract offer from the Longhorns to stay in Corvallis, a source told the American-Statesman on Friday.

The feeling is Texas will now turn to UCLA’s John Savage to put an end to a wild coaching search that began 19 days ago when Augie Garrido was reassigned.

Texas is believed to have interviewed Casey on Thursday, a day after it met with LSU’s Paul Mainieri. The Statesman reported earlier this week that Texas had identified Casey, 57, as one of its top coaching targets.

Casey, who makes just under $1 million annually at OSU, is now the seventh coach who has either turned down overtures from Texas or preemptively pulled out of the race. The others are Louisville’s Dan McDonnell, TCU’s Jim Schlossnagle, Florida’s Kevin O’Sullivan, Virginia’s Brian O’Connor, Vanderbilt’s Tim Corbin and Mainieri.

Next season will be Casey’s 23rd at Oregon State, where he led the Beavers to consecutive national titles in 2007 and 2006 and was named the national coach of the decade for the 2000s by Baseball America.