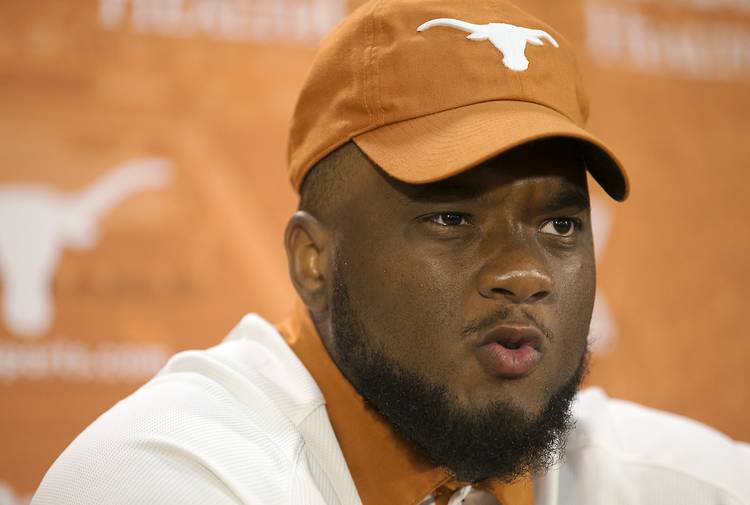 In today’s Golden’s Nuggets, Cedric touches on a Bevo-related item:

Former Texas defensive tackle Paul Boyette Jr. doesn’t care about draft projections. He knows the odds are against him putting together a decade-long career in the NFL.

With that said, PB&J has enlisted the aid of retired defensive end Kevin Vickerson to aid him in realizing his NFL dream.

In Vickerson, he sees a player who has been where he wants to go. Vickerson, a seventh-round pick out of Michigan State, played 86 games in 11 seasons with three NFL teams, a real underdog who cashed $10.9 million in NFL paychecks and played in Denver’s Super Bowl XLVIII loss to Seattle.

“Kevin is like my big brother,” Boyette said. “A guy that’s played a decade and a year after after that in the league is very unheard of, especially at my position. The way he kept this body going and kept competing each play and getting to the Super Bowl with the Broncos … and just telling me the cause and effect of how the game is what’s getting me ready to the next level.”

Boyette, who played in 42 games in his Texas career, had a good workout at last week’s pro timing day. He had 30 reps on the bench — only three lineman at February’s scouting combine did more — as well as a 4.98 in the 40-yard dash, a broad jump of 8-8 and a vertical jump of 27 1/2 inches.

“His mindset is that of a a tough guy,” Vickerson said. “His upside is definitely high. He’s like a sponge, trying to absorb everything I say to him and that makes me want to help him even more because I see the same fire in his eyes that I had when I was coming out of college and going through this same process.”

Boyette wasn’t clear with his listed height, but told us he weighed in at “a sexy 310” pounds. His goal is to find himself in an NFL camp somewhere this summer.

There are different routes to NFL success and literally hundreds of success stories like Vickerson who were either drafted late or perhaps not even at all, like Nate Newton, Wes Welker or current Eagles star Jason Peters, who signed with the Buffalo Bills as a free agent in 2004. He’s played in nine Pro Bowls in his 13 seasons.

For the rest of Cedric’s Nuggets, including his take on the NCAA Women’s national championship, the NBA and Wrestlemania, click here.