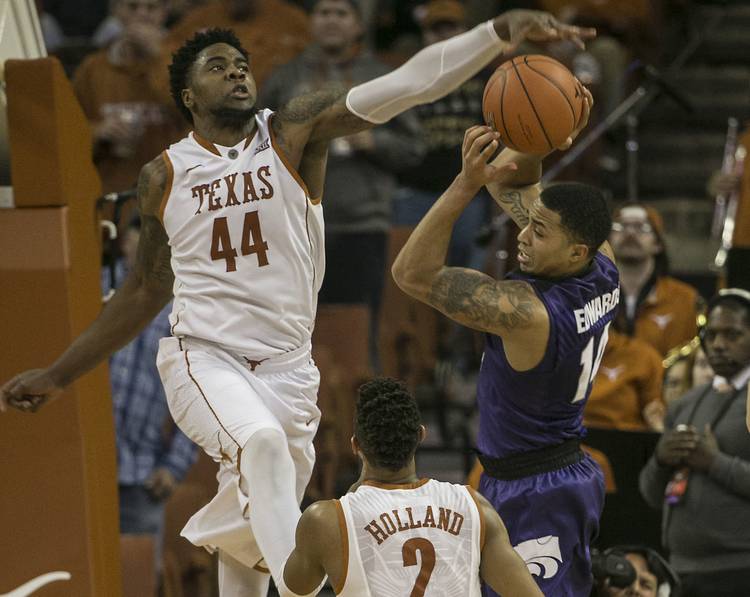 On Sunday, the Big 12 announced its annual awards, as voted on by the league’s 10 coaches. Ibeh finished the regular season with 60 blocks, the second-highest total in the league.

Ibeh, a 6-foot-11 senior from Garland, has been Ridley’s backup for the majority of his UT career. The quiet, reserved big man never averaged more than 13.6 minutes per game his first three seasons.

But everything changed two days after Christmas, when Ridley came down awkwardly in practice. Ridley, who has 96 career starts, knew something was wrong. Doctors discovered Ridley suffered a fracture in his foot, an injury that’s sidelined him ever since.

Six days later, Ibeh got his second start of the season in the Big 12 opener at Texas Tech. Ibeh had no points and four turnovers but also 10 rebounds.

“If there’s any pressure, it’s not from people watching me,” Ibeh said after the Longhorns lost to the Red Raiders, 82-74. “I just want to have the team in the right spot and avoid things like that. But there’s no outside pressures.”

As Ibeh found his rhythm, the team righted itself and starting winning more games. Early in conference play, guards were force-feeding him the ball on the game’s first possession to get Ibeh a touch and possible basket early. That worked for a while, to a degree.

His best three-game stretch came in late January, starting against TCU. Ibeh had 17 points, 10 rebounds and five blocks. Then, he had 13 points and 11 rebounds against Vanderbilt. Ibeh had five blocks at Baylor and another six against West Virginia.

While Ibeh has never been gregarious, first-year coach Shaka Smart knew his new starting center was engaged and wanted to improve. Ibeh had double-digit rebound totals against No. 3 Oklahoma and No. 2 Kansas in late February.

“We’re talking about a very high, high level intellect,” Smart said in mid-February. “He thinks about things at a high level, not quite the same like a coach would, because he’s not trained like a coach would. But some basketball things and human things, he just understands.”