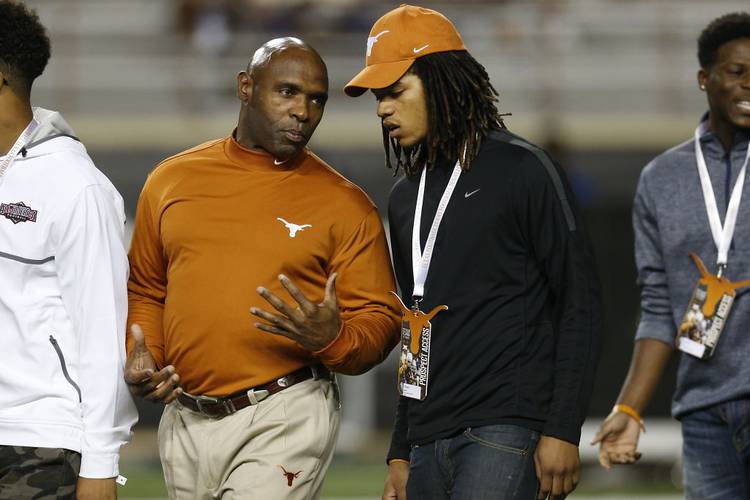 There are 85 days until national signing day, and of the 10 committed football players Texas has, six are from the state of Texas.

The Lone Star state is well-known for high school football and this week is one of the most exciting weeks of the season as the UIL postseason begins.

Where will the 2016 Texas committed football players be this week?

The undefeated 10-0 Gilmer Buckeyes will play Texarkana Pleasant Grove High School on Nov. 13. Gilmer enters the Class 4A, Division I playoffs as the No.2-ranked Class 4A team in the state. Boyd is a three-star recruit and a 6-foot, 223 pound linebacker who committed to the Longhorns in January —a month after helping Gilmer to a Class 4A, Division I state championship.

The son of former Texas Rangers third baseman — and current Rangers bench coach and former Triple-A Round Rock manager — Steve Buechele, Shane is a four-star recruit and one of the top high school quarterbacks in this recruiting class according to Rivals.com. Shane Buechele led Lamar to a 9-1 record in 2015 and will face Abilene in the Class 6A, Division II playoffs on Nov. 13. Buechele committed to Texas in February.

Blessed to be part of something special!🐂🐂 #HookEm #BG pic.twitter.com/0q5dMvfsL2

The standout receiver for the Class 4A power Navasota has helped his team go 10-0 this fall and will start the playoffs on Nov. 13 against Columbia in the Class 4A, Division 1 playoffs . Dickson has 50 catches for 895 yards and 12 touchdowns for the Rattlers. He committed in July.

Eboh helped the perennial power Dragons to an 8-2 record and a second-place finish in District 7-6A. Southlake Carroll will play Cedar Hill in the bi-district round of the Class 6A, Division II playoffs. The three-star recruit Eboh committed to the Longhorns in September.

The four-star wide receiver helped Manvel to an 8-2 record and a bi-district date with Channelview on Nov. 13 in the Class 6A, Division II playoffs. Hemphill-Mapps committed to Texas in October.

Imade, the 6-foot-5, 324 pound three-star recruit, helped Arlington Bowie to a 6-4 record and third-place finish in District 4-6A. Arlington Bowie will play the famous Permian Panthers of Odessa in bi-district on Nov. 13. Imade helped pace an offense that generated 311 yards rushing a game. He committed to Texas in May.

Collin Johnson, a four-star wide receiver from San Jose Valley Christian High School in California who committed in April, has helped his team to a 7-2 record and ends the regular season this week.

Malcolm Roach, who committed just last week, has helped Baton Rouge Madison Prep Academy to a 10-0-1 record and will begin the playoffs on Nov. 13 against Archbishop Hannan. Roach is a three-star recruit and is 6-foot-inches and 255 pounds.

Gerald Wilbon wraps up the list committed players as the Destrehan, La. senior helped Destrehan High School to a 9-0 record. The three-star recruit and 6-foot-3-inch 305 pound defensive tackle will begin the Louisiana state playoffs against Denham Springs on Nov. 13.

Texas used the most recent home game against Kansas as a chance to invite several recruits to the 40 Acres. One such recruit, Corey Lane of Nacogdoches High School (a senior defensive back and two-star recruit), was able to score some one-on-one time with Charlie Strong before Texas beat Kansas 59-20.

Lane won’t be headed to the UIL playoffs after the Dragons went 4-6 this past season.