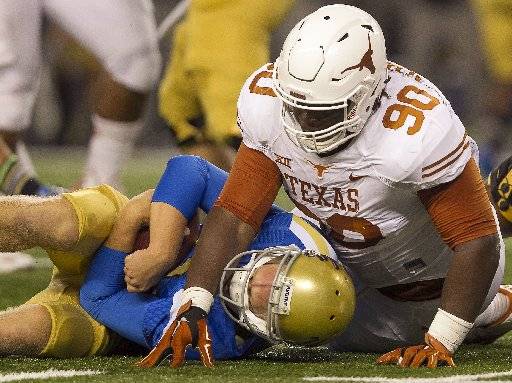 If we could do it over, here’s how we’d list the best prospects.

A two-time defensive lineman of year in the Big 12. He was the first pick of the NFL draft’s second round in 2016. Was unranked on the Fab 55.

Fields starred for two teams. He was All-Big 12 for TCU, then was dismissed. He then became a two-time All-ACC at Louisville. Was No. 20 on the Fab 55.

The two-time all-conference selection rushed for 4,213 career yards, a school record. Was unranked on the Fab 55.

All-American, set the Big 12 record for most field goals in a career. Unranked on the Fab 55.

And, to show how imperfect recruiting really is, here are some more names who didn’t make the Fab 55.

Here’s how the national top 10 from the 247sports.com composite fared after five years.

How the top 10 overall recruits in the country in 2012 panned out. All but one became NFL draft picks:

1. Dorial Green-Beckham, WR: Signed with Missouri. Was dismissed by the Tigers in 2014 and transferred to, but never played for, Oklahoma. Was a second-round draft pick in 2015 by the Tennessee Titans, but is now with the Philadelphia Eagles.

2. Mario Edwards, DE: Signed with Florida State. Earned all-conference honors in 2014 and was the 35th overall pick of the 2015 draft by the Oakland Raiders.

3. D.J. Humphries, OL: Signed with Florida. Was the 24th overall pick of the 2015 draft by the Arizona Cardinals.

4. Shaq Thompson, S: Signed with Washington. Was an All-American in 2014 and a first-round pick in 2015 by the Carolina Panthers.

7. Landon Collins, S: Signed with Alabama. Was a unanimous All-American in 2014 and the 33rd overall pick of the 2015 draft by the New York Giants.

8. Stefon Diggs, WR: Signed with Maryland. The Minnesota Vikings drafted him in the fifth round of the 2015 draft.

9. Malcom Brown, DE: Signed with Texas. Was an All-American in 2014 and the New England Patriots’ first-round pick of the 2015 draft.