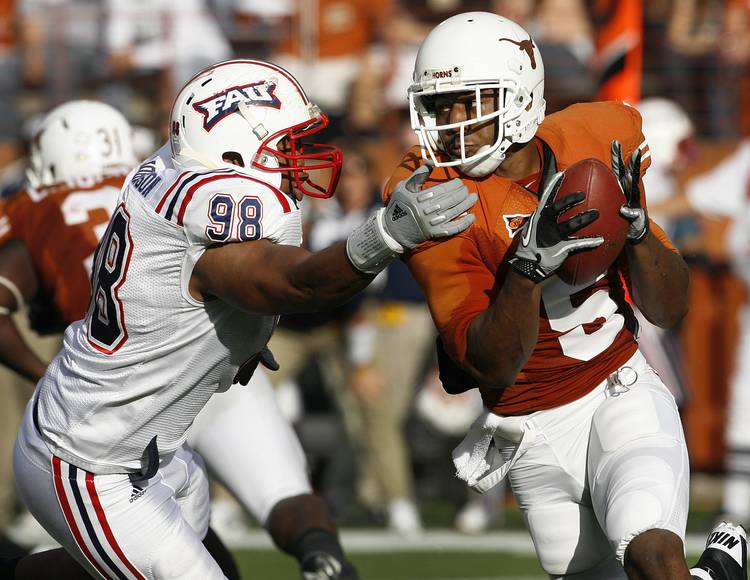 This week the Washington Post took a look back at the Top 100 recruits, as designated by Rivals, from the 2007 signing class. The feature states 39 on the list were drafted by the NFL with 20 still in the league. Seven made the Pro Bowl. Four are dead, including one the Longhorns signed that year. The No. 1 recruit that year was Notre Dame quarterback Jimmy Clausen. Other notables include Eric Berry, Cam Newton and Dez Bryant.

Eight Longhorn signees dot the list. Those commits along with others from that year gave the Longhorns the No. 4 class nationally with two five-star recruits – John Chiles and Tray Allen.

So just where are the former Longhorns from that list now?

Here’s what the Post had to say about the Longhorn signees from the Class of 2007 and where they are now:

“After college, Allen played briefly in the Arena League. Most recently, he has been an educator and high school coach in San Antonio.”

“Brown was a third-round pick by the Steelers in 2011 and spent three seasons as a role player. He played in the CFL last season.”

“Once touted as the next Vince Young, Chiles instead moved to wide receiver at Texas. He never played in the NFL but dabbled in the Arena League and CFL.”

“Undrafted in 2011, Huey spent time with four NFL teams but never made an active roster. After some success in the Arena League, he is now a car salesman in Texas, according to his LinkedIn profile.”

Hookem.com’s Rick Cantu profiled Jones in 2014. He graduated high school early and arrived on campus in the spring of 2007. He was arrested for armed robbery in July 2007 and eventually plead guilty in June 2008. Tragically he passed away Feb. 14, 2014.

“Williams was a starter for the Longhorns but left school after three years to tend to family issues, according to news reports at the time.”

“Wells transferred to Stephen F. Austin. He signed with the Redskins as an undrafted free agent in 2012 but didn’t catch on and has spent some time in the CFL and Arena League.”

“Robinson was drafted in the fourth round in 2012 by the Redskins and has appeared in 52 NFL games. He spent last season with the Giants.”

Who would win the all-time matchup? Texas men versus Texas Tech