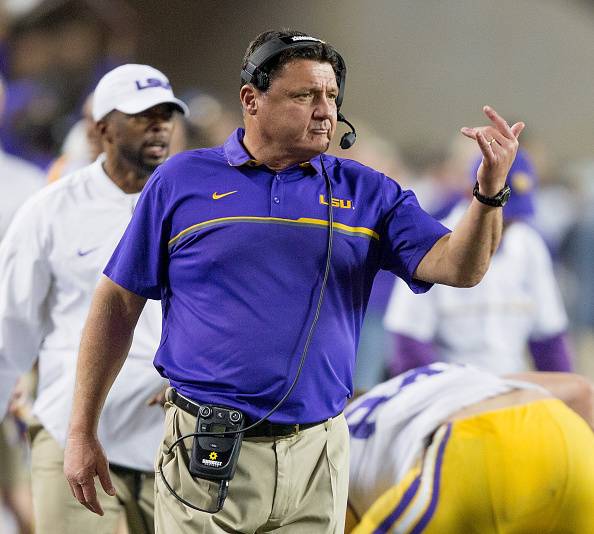 New LSU coach Ed Orgeron doesn’t want Texas or any other outsider conducting summer camps, which are used to scout future players, anywhere in his state.

So according to Sports Illustrated, he pushed to have many of them blocked. Two of the camps were scheduled to be hosted by Mississippi’s Belhaven University at high school stadiums in Baton Rouge and Hammond, La. Coaches from Texas and Houston were expected to help work the camps. So were coaches from smaller schools.

Last month, coaches from Texas, Texas A&M and Arkansas were uninvited to a camp set for Southeastern Louisiana. And Michigan coaches were told not to come to a camp at Tulane.

Hal Mumme, who coaches Belhaven and organized two of the camps, said in a radio interview Thursday that he’s contacted the NCAA about Orgeron’s behavior. He said his program lost $5,500 when stadiums he’d booked for the camps suddenly were unavailable.

“The kids that got hurt are not the kids LSU and Texas are going to recruit,” Mumme said during an interview with 99.1 The Game.

“I don’t see how a public figure at an SEC school can basically extort people into not using their facilities for the public good,” Mumme said.

Here’s another interview with Mumme:

Orgeron was interviewed by a radio station in Baton Rouge earlier Thursday. He said:

“I love the state. We’re the flagship school. We want to give every man, every player in the state of Louisiana great opportunities. We’re doing that.  We’ve brought in every state school to our camp, recruit the guys. …

Mumme is the former head coach at Kentucky. He’s known as an offensive whiz and his influence can be seen at many schools, including Texas Tech, Oklahoma, West Virginia and at times, Texas.

What’s the best college basketball job in the state of Texas? ESPN chimes in