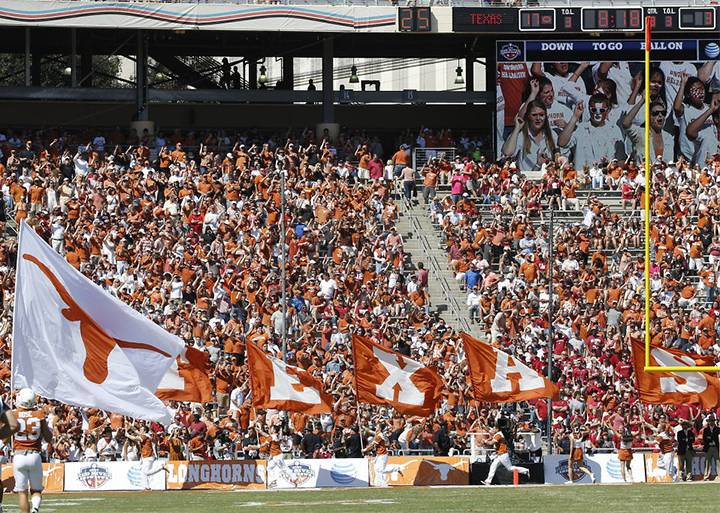 OCTOBER 10, 2015 - Texas celebrates a second half field goal in the AT&T Red River Showdown between Texas and Oklahoma held at the Cotton Bowl in Dallas, Tx., on Saturday, October 10, 2015. (RODOLFO GONZALEZ / AMERICAN-STATESMAN)

Let the dulcet tones of a 51-year-old Keith Jackson carry you there.

“Today, the 75th meeting between Texas and Oklahomaaah. It happens in Dallas. The football game, the party. Ohhhoooh, what a party.

A few years ago, they started a little pep rally in downtown Dallas. It has grown in to a happ-e-ning.”

Hat tip to Deadspin editor Timothy Burke (@bubbaprog on Twitter), who unearthed this gem and posted it early Wednesday morning. The video of the 1980 ABC Sports intro to that year’s Red River Rivalry is like something out of a college football time machine.

Hello, friends. I have something beautiful to share with you. The intro to the 1980 Red River Shootout: pic.twitter.com/dSQjY4iozr

RELATED: 5 stats to know about Texas in the Cotton Bowl

So many generations grew up with Jackson’s voice describing the action, making him the perfect narrator to set the scene. But the images are the main attraction.

Scenes of party goers — many types of drinking vessels in hand (check out the guy with the cooler at 0:35) — marching down Commerce Street, followed by pregame views of the Cotton Bowl that will feel familiar to all.

Make sure to stick around until the end for a glimpse of Jackson sporting a wonderful salt-and-pepper beard. “He’s going for the cornerrr…”  was still a quarter-century away, but Jackson was already staking a place in the hearts and minds of Longhorns.