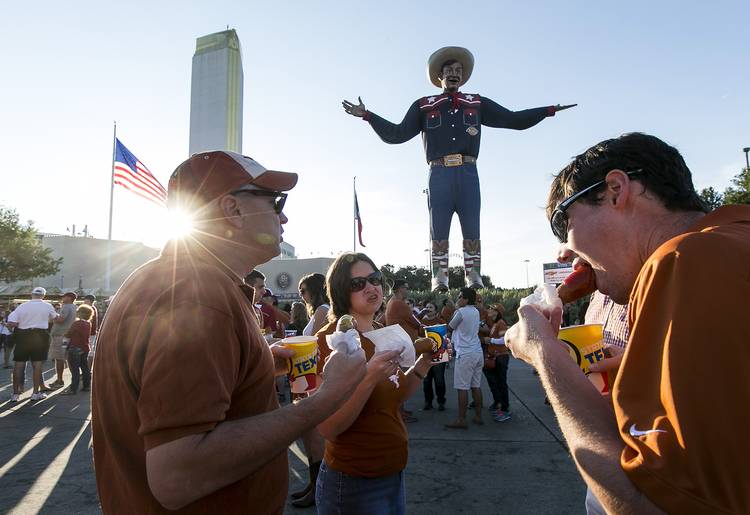 OCTOBER 10, 2015 - Texas fans, Mark Jacobs, Jennifer Bowland, Billy Jacobs, behind, and Ryan Jacobs, left to right, enjoy a famous Fletcher's corndog in front "Big Texas" at the State Fair of Texas before the start of the Big 12 conference game between Texas and Oklahoma held at the Cotton Bowl in Dallas, Tx., on Saturday, October 10, 2015. (RODOLFO GONZALEZ / AMERICAN-STATESMAN)

Red River Rivalry Radio, a new streaming audio station, is on the air, providing a week of Texas-Oklahoma coverage and marking a new chapter in the 119-year-old border series.

Listen from your desktop or through mobile at RedRiverRivalryRadio.com.

The online initiative is the product of a collaboration between the American-Statesman’s Hookem.com and The Oklahoman in Oklahoma City. The station features analysis and memories from sportswriters from both newspapers, offering perspectives from both sides of the Red River. It also carries audio highlights and recaps of Texas-Oklahoma games through the years.

The week of coverage caps off with live coverage from Dallas on Thursday, Friday and Saturday.

On Thursday, the station will be broadcasting live from the site of the Red River Celebrity Softball Game at Dr. Pepper Park in Frisco. The live broadcast on Red River Rivalry Radio will go from 3-9 p.m. and American-Statesman columnist Cedric Golden will join the broadcast team.

Weather forecast for Texas-Oklahoma game: It’s 2001 all over again