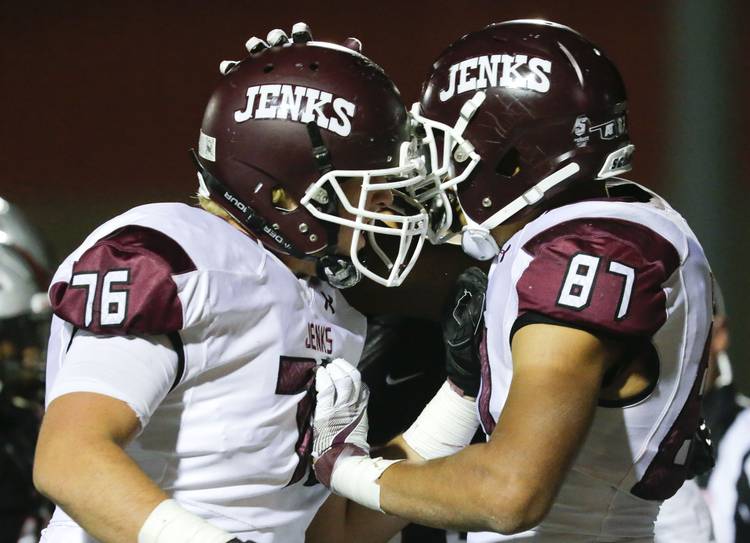 Jenks', Reese Leitao, 87, celebrates after scoring a touchdown against Union in the Class 6AI semifinal game between Jenks and Union at Owasso Stadium in Owasso, Thursday Nov. 18, 2016. JESSIE WARDARSKI/Tulsa World

Texas made the wrong decision by clearing the way for tight end signee Reese Leitao to play football for the Longhorns after his felony drug charge was reduced to a misdemeanor with a four-year deferred sentence. Texas gathered pertinent facts after Leitao admitted in February to selling — yes, selling — the anti-anxiety drug Xanax, a controlled substance, when he was found to be in possession of about $1,300 in cash and 20 pills, 19 of them stored in a prescription bottle in his underwear. He was initially charged with possession of a controlled substance with intent to deliver within 1,000 feet of a school, a felony. Longhorns head coach Tom Herman and men’s athletic director Mike Perrin are taking a big risk by bringing Leitao aboard. Leitao deserves a second chance to make good, and I hope he makes the most of it, but I think he forfeited his privilege to play for the Longhorns.

On the Longhorns baseball team having extra motivation at the Long Beach regional:

The NCAA may not have it in for the Texas baseball team — and I don’t think it does — but if the Longhorns believe that’s the case, more power to them. Can’t hurt to have extra motivation. A few Horns were irritated by video highlights on ESPN’s selection show that included Longhorns lowlights, namely shots of catcher Michael Cantu striking out. “It’s funny that when they show us, it’s us losing,” said senior first baseman Kacy Clemens. “Whatever satisfaction they’re taking, they can have it. We’ll take it on.” Senior center fielder Zane Gurwitz went further, saying, “Everybody is out to get Texas. All they show on us are bad things.” Hey, if Texas is ticked off headed to the Long Beach State regional as a very capable contender, it can’t hurt. I thought it was more of a slap to send Texas, a No. 2 seed, so far from home when third-seeded Texas A&M stayed closer to home and was assigned to Houston. None of the Longhorns appeared bothered by any such insult, however. Gurwitz, who has been hampered by a bad hamstring all season and sat out 23 games this season — including three at the Big 12 Tournament — promises he’ll play in the regional, no matter what. “If I had to chop it off and play on one leg,” Gurwitz said, “I’d go do it.” Love that fire.

More on the Longhorns’ chances in California:

The Longhorns should be considered armed and dangerous because they’re peaking and loaded with arms. Texas hit .307 in the Big 12 Tournament, with Gurwitz (.545), Cantu (.500), Bret Boswell (.421), Clemens (.409, six RBI), Patrick Mathis (.368) and David Hamilton (.318) all on fire. Head coach David Pierce said the Long Beach field could “arguably be the four best defensive teams in the tournament.” That could definitely work to Texas’ advantage. Friday starter Nolan Kingham will go against UCLA’s Griffin Canning, a junior right-hander who has three complete-game shutouts this season and eight career complete games. Canning likely will be a first-round draft choice next month, and he’s projected to go 17th to the Mariners by MLBDraft.com and 21st to the Orioles by Baseball America. A confident Pierce said: “We have a chance to go to the beach for the next two weeks” since the survivor of the Long Beach regional will face the winner of the Stanford regional. He admitted he was joking and said he won’t be packing a Speedo. “If you saw me in a Speedo,” he added, “that’d be a struggle.”