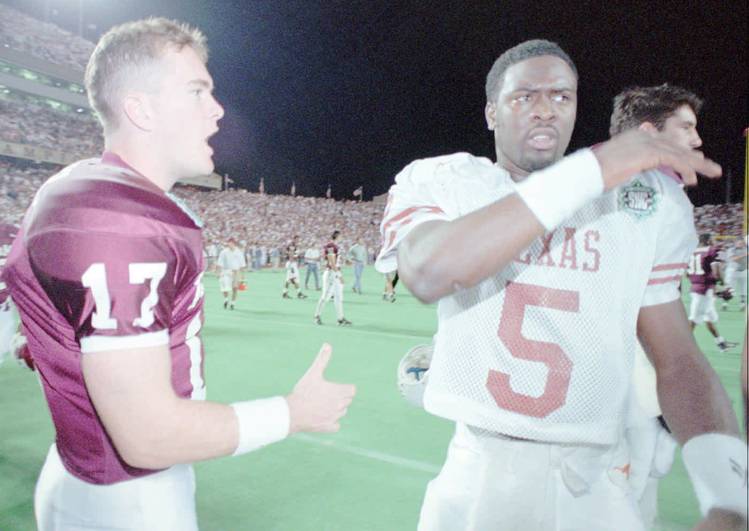 Texas quarterback James Brown, right, refuses to shake hands with Texas A&M wide receiver Gene Lowery after the 1995 game in College Station between the Longhorns and Aggies. He told him that they now must respect Texas with the 16-6 Longhorns victory. (Karen Warren - Austin American-Statesman)

Twenty years ago, it was goodbye to A&M and goodbye to the Southwest conference.

On Dec. 2, 1995, the Longhorns won the final SWC crown with a 16-6 win over the Aggies in College Station. The victory over A&M gave Texas 25 conference crowns in a league the Horns dominated for 82 years.

Coach John Mackovic’s fourth year at the helm produced an undefeated conference run sandwiched between a 55-27 nonconference defeat at Notre Dame and a 28-10 Sugar Bowl loss at the hands of Virginia Tech. The year also produced the last tie in school history with a 24-24 draw with the Sooners in the Cotton Bowl.

A photo gallery of the entire 1995 season can be found here.

Key members to the team were:

The junior wideout led the conference in receptions (53) and receiving yards (876). As the main punt and kickoff returner, he also topped the team with 1,472 all-purpose yards.

The senior defensive end was named all-conference and was a second-round draft pick of the Jacksonville Jaguars in the 1996 NFL Draft. His seven sacks, five forced fumbles and 16 tackles for loss were tops on the team.

The sophomore quarterback paced conference in passing TDs (19) and efficiency (126.5). In a 52-20 win over the University of Houston, Brown tossed four touchdowns and ran for one more while totaling 355 yards from scrimmage.

The junior defensive back was named all-conference and led the team with six interceptions and a school record 146 return yards. He was second on the team in tackles with 129.

The current NFL kicker and then sophomore paced the team with 86 points, hitting 13 of 20 field goals in the season. His most memorable kick was a 50-yard in-to-the-wind field goal as time expired to beat No. 14 Virginia 17-16.

The junior tight end was named an All-American while leading the conference in receiving touchdowns (8). He scored three times in the Longhorns 55-27 away loss at Notre Dame.

The Longhorns head coach was tabbed conference coach of the year in his most successful season at the helm on the 40 Acres. The undefeated conference run for Texas has only been accomplished twice since – in 2005 and 2009.

The junior college transfer from Austin paced the Horns rushing attack with 1,099 yards and 10 rushing touchdowns. His 180 yards versus SMU was a season high.

The junior guard was named all conference and All-American. Drafted by the Denver Bronco, he played eight years, winning two Super Bowls.

The hard-hitting junior cornerback was named all-conference, leading the team in pass breakups with nine. Eventually he became the fifth overall pick in the 1997 NFL draft by the Detroit Lions. His hit on A&M’s Leeland McElroy  and sack and forced fumble on Aggie QB Corey Pullig accentuated the team’s victory in College Station.

The day before the 1995 Sugar Bowl, the identity of one rarely-used Longhorns defensive back came into question. Ron Weaver had been enrolled and played the entire 1995 season under the assumed name Ron McKelvey. Weaver, who had previously expired his NCAA eligibility in 1989 while at Sacramento State, used a social security number and date of birth from a friend that had never played football to re-enroll in a junior college. He played two years there and eventually was recruited to play for Texas. An entire Sports Illustrated feature on the saga can be read here.