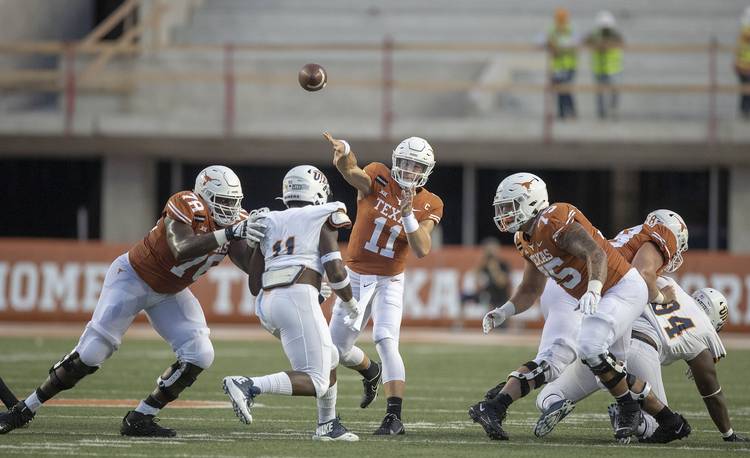 Texas quarterback Sam Ehlinger (11) passes the ball against UTEP in Austin on Sept. 12, 2020. Texas and Oklahoma, the two favorites in the Big 12, each opened the season with wins. [RICARDO B. BRAZZIELL/AMERICAN-STATESMAN]

Texas quarterback Sam Ehlinger may have been “disappointed” with how he played in the Longhorns’ first game of the season, but the Big 12 was not.

In a 59-3 beating of over UTEP on Saturday night, Ehlinger threw for 426 yards and five touchdowns. Ehlinger completed 25 of his 33 attempts. He played only one series in the second half.

Ehlinger’s 426 passing yards are the third-most in UT’s history. Ehlinger and Texas Tech’s Alan Bowman, who had 430 yards and two touchdowns in a 35-33 win over Houston Baptist, were the only Big 12 quarterbacks who topped 300 passing yards in their first games.

In his postgame press conference, Ehlinger said he was actually “disappointed” with how he played against the Miners. Ehlinger noted that he missed on a couple of opportunities to put more points on the scoreboard. On the two first-half drives that Texas attempted field goals on, Ehlinger was unable to connect with receivers Tarik Black and Brennan Eagles on passes into the end zone.

During his weekly media availability on Monday, Texas coach Tom Herman was asked about Ehlinger’s self-evaluation. Herman was pleased with Ehlinger’s performance, but understood those comments.

“Anytime you throw for 424 yards in a half and five touchdowns, that’s a pretty good day at the office,” Herman said. “There was a few (throws), I could see why he said what he said. … Those were only a couple compared to the numerous really good reads and great throws that he made.”