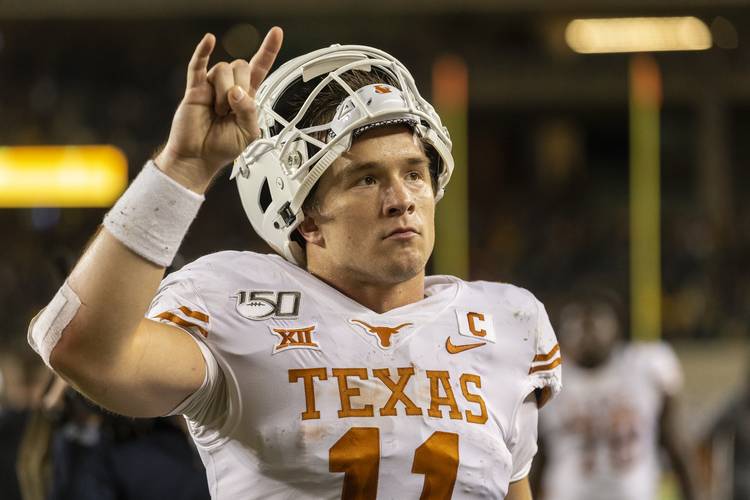 Texas quarterback Sam Ehlinger stands for the playing of "The Eyes of Texas?" after a 24-10 loss to Baylor in Waco on Nov. 23, 2019. [Stephen Spillman for Statesman]

On Tuesday, Texas quarterback Sam Ehlinger argued that there has been a “misunderstanding” about a picture of him standing alone for the playing of “The Eyes of Texas.”

Following a 53-45 loss to Oklahoma in Dallas on Oct. 12, Ehlinger was among a few UT players who stayed for the postgame playing of “The Eyes of Texas.” That song has been heavily scrutinized this year for its problematic ties to minstrel shows and a saying by Robert E. Lee, and a debate has been had about whether UT athletes should observe it. But the sight of only Ehlinger recognizing the song at the Cotton Bowl has created a furor among Texas fans.

Read more: Texas players not mandated to stay for ‘The Eyes’ but team is unified going forward
Advertisement

While meeting with the media for the first time since that Saturday, Ehlinger called the episode a “misunderstanding.” Ehlinger said he lingered at the Cotton Bowl to talk with coaches and players while the Sooners celebrated their win. He was among the only players left by the time the song started playing.

Ehlinger downplayed the notion that he was stranded by his teammates. He added that senior defensive lineman Ta’Quon Graham was waiting for him when he headed to the locker room.

As for why Ehlinger recognized the song, the senior and two-year captain explained that had more to do with his family. Ehlinger grew up as a Texas fan and his parents both attended the school. He said he has explained his feelings to his teammates and they have been understanding.

That perspective is that I grew up a Longhorn. I grew up singing The Eyes of Texas’ win, lose or draw. I shared that experience with my family. I shared that experience with my (late) dad, and never once singing that song has anything negative ever crossed my mind. It was always about paying respect to the university and the incredible tradition that the University of Texas has. I also feel a connection with my family and my dad singing that song because I grew up doing that. That’s why it’s important to me. All of my guys and all of my teammates understand that and they know my perspective.”