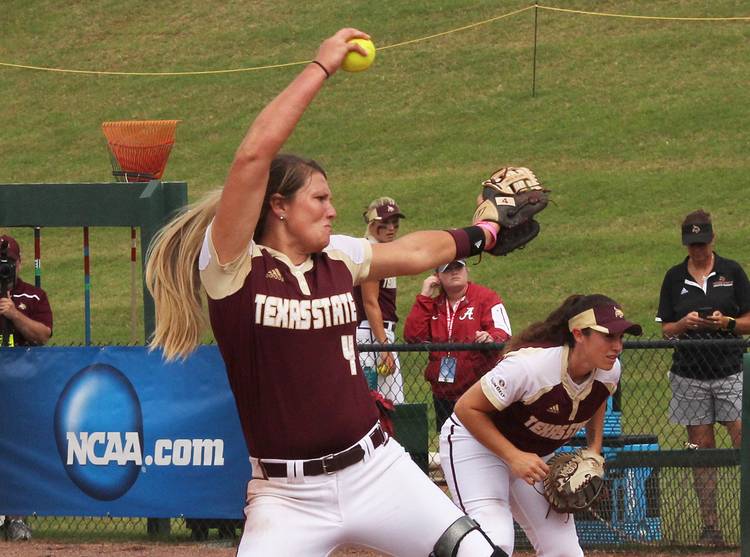 Texas State ace Randi Rupp is coached by Longhorn great Cat Osterman, an assistant coach for the Bobcats. On Wednesday, Rupp pitched Texas State to a 2-1 victory over the Longhorns at McCombs Field, a place where Osterman won 136. PHOTO COUTESY OF TEXAS STATE ATHLETICS

Cat Osterman knows a thing or two about winning games at McCombs Field. Texas State’s assistant coach won 136 of them there during her four-year career with the Longhorns.

Wednesday night, Osterman’s star pupil — Texas State junior Randi Rupp, the Sun Belt’s preseason pitcher of the year — also finally found out what it’s like to win at McCombs. She shut down Texas’ high-powered offense for a 2-1 victory.

It wasn’t Rupp’s first victory over the Longhorns.  That happened last year when Texas State  defeated then-ranked No. 24 Texas 9-5 at Bobcat Softball Stadium. But it was her first win at McCombs Field in four tries, including a 7-6 loss to Ennis in the Class 4A semifinals of the 2014 state tournament, when she was a senior at Mont Belvieu Barbers Hill.

But unlike last year, Rupp wasn’t dishing out a “Texas butt-whoopin,'” as she characterized that 2016 win. Instead, she was cool and collected, icing UT’s offense that averaged six runs per game at last weekend’s Mary Nutter Classic in California, which included No. 15 Tennessee and No. 20 Missouri in the field.

The Bobcats (10-3) took a 2-0 lead in the top of the first inning on a two-run home run by Ariel Ortiz. Rupp gave up a run in the bottom of the first when Stephanie Wong advanced from third on an illegal pitch. From that point on, Rupp controlled the game, striking out senior Devon Tunning, the team’s third-leading hitter, for the final out.

In the past, when Rupp has discussed her recruiting, there always seemed to be a chip on her shoulder when it came to the Longhorns, who passed on her in favor of Huntington’s Erica Wright in 2014. Rupp and Wright were club teammates.

Maybe that’s why these victories over Texas could be just a little more sweet to her. They likely are for the coach Rupp calls “Coach O” too.

Texas’ offense came to life at the Mary Nutter Classic, where the Longhorns went 4-2 and got their biggest win of the year over 15th-ranked Tennessee. But now the Longhorns are carrying a three-game losing streak.

Here’s a few good things and a few bad things as we head into this weekend’s three-game series at No. 6 Arizona.

AROUND THE HORN: Here’s a quick look at a couple of storylines involving the Big 12, state schools,  the Longhorns and their opponents:

BIG 12 POWER POLL: Baylor takes over the top spot in this week’s Big 12 power poll. Oklahoma falls to No. 2, but expect the Sooners to return to their throne quickly. Texas jumps to No. 3 with a few big wins while Iowa State’s five-game winning streak turned into a four-game losing skid.
That’s all the dust for this week. As always, swing for the fences.

Texas and Texas Tech to meet on Black Friday