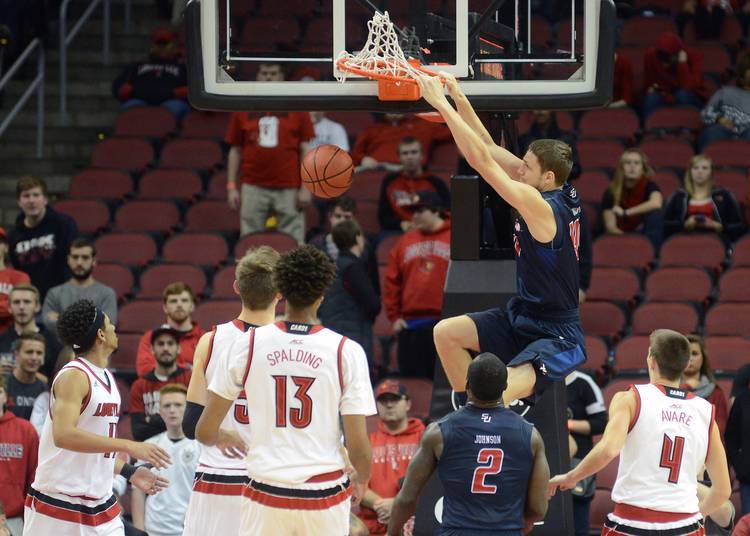 Samford's Dakota Quinn dunks during the second half against the Louisville Cardinals in the season opener at KFC YUM! Center on November 13, 2015 (Photo by Dylan Buell/Getty Images)

About Texas: Coach Shaka Smart spends every waking moment trying to pump up his players’ confidence and imploring them to attack. “I think there’s a little bit of a notion that ‘Hey, we’re Texas’ and it’s just going to happen,” Smart said. “Nah, it doesn’t happen. You’ve got to go out and attack and go take the game.” … G Javan Felix is quietly off to a terrific start with his 3-point shooting. Picking and choosing his spots, Felix is 13 for 26 (50 percent) so far this season. … C Cam Ridley can’t be the only one getting rebounds. No other Texas player ranks in the Big 12’s top 20 in that category. No other UT player averages more than 4.8 boards per game.

About Samford: This is a homecoming of sorts for Pflugerville’s Jamal Shabazz, who has seen his minutes and production increase in his senior season. Shabazz averages 23.4 minutes per game and is shooting 32.4 percent from 3-point range. … The Southern conference team may not stir much emotion from Texas fans, but it’s another good test on the offensive glass. The Bulldogs average 11.6 offensive boards per game and grabbed 15 against Louisville. … Samford has made at least one 3-pointer in 730 consecutive games, a stretch dating back to Jan. 1991. … Coach Scott Padgett was a standout at Kentucky and was a first-round draft pick in 1999. He joined the Samford staff in 2012.