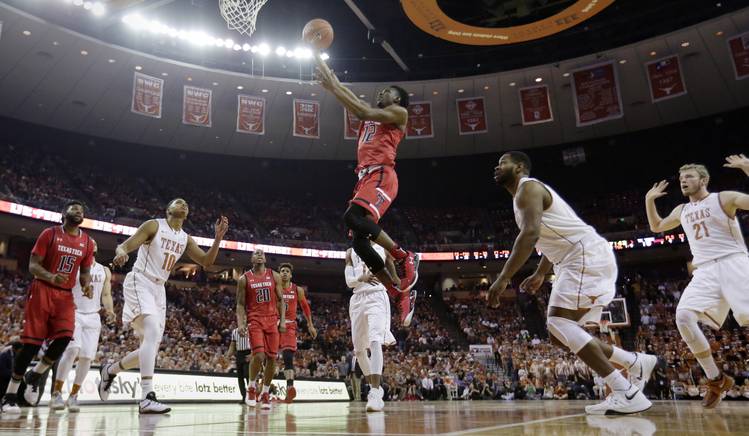 Texas Tech guard Keenan Evans (12) drives to the basket to score against Texas during the first half of an NCAA college basketball game, Saturday, Feb. 6, 2016, in Austin, Texas. (AP Photo/Eric Gay)

Texas couldn’t find its groove early but took a nine-point second half lead and cruised to a 69-59 win over Texas Tech on Saturday.

The Longhorns’ guards had to do almost all the heavy lifting. Javan Felix finished with a game-high 20 points, Isaiah Taylor added 13 and Kerwin Roach scored 12.

Taylor threw an alley-oop jam to Roach, and then Connor Lammert followed with a 3-pointer, giving the Horns a 65-54 lead with 3:08 remaining.

Texas has won 20 straight games over Tech in Austin. The Red Raiders have not won at the Erwin Center since Feb. 24, 1996, the final year of the Southwest Conference. That was arguably the best team in Texas Tech basketball history.

It’s a fairly obvious choice. Texas guard Javan Felix was sizzling from the start, hitting two 3-pointers and another bucket that gave the Horns an early 8-3 lead. Felix hit another tough shot to spark a 7-0 run that gave Texas some second-half breathing room.

Not the best day for Texas’ big men Prince Ibeh and Shaq Cleare. Ibeh had no points, no shots, one rebound and four fouls in 13 minutes. Cleare had four points on 2 of 5 shooting and four rebounds.

UT officials stopped giving out the actual turnstile count two years ago. Now, the school announces the amount of tickets distributed for its attendance figures. But more people are coming, according to the eye test. The announced crowd was 14,951. Fans sitting in the arena’s upper reaches and the end zones. Home attendance should be strong with home games against West Virginia, Baylor, Oklahoma and Kansas still remaining.

The Horns usually don’t make sloppy mistakes like they did Saturday. Kerwin Roach started a runout and threw a bad pass to Prince Ibeh. The ball bounced off his head and went out of bounds. The defense fell asleep when Keenan Evans drove down Broadway for an easy layup. Before halftime, Roach threw a pass into traffic when Isaiah Taylor wasn’t even looking. Eric Davis also had back-to-back turnovers in the second half.

Texas will make its second straight appearance on ESPN’s “Big Monday” broadcast, and yes, it’s a big one — at No. 1 Oklahoma. The Horns are 0-8 all-time against top-ranked teams. They haven’t won at Norman since 2012. In fact, the Sooners have won five of the last six games in the series.