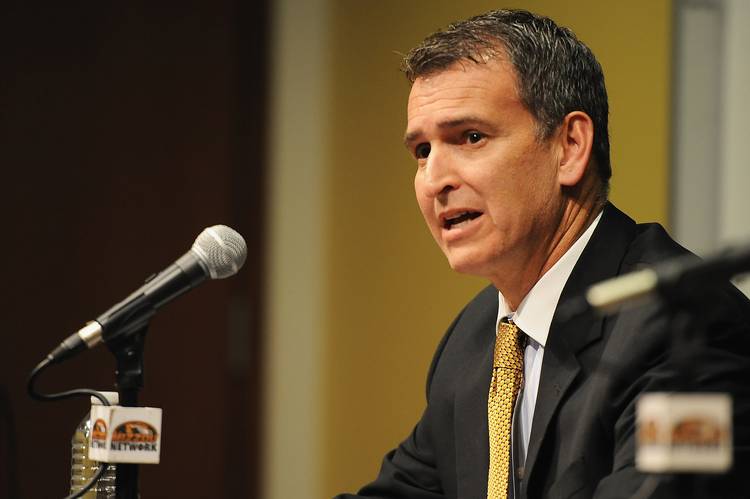 University of Missouri Athletic Director Mack Rhoades should be someone that University of Texas officials should keep tabs on for its position. (Photo by Michael B. Thomas/Getty Images)

“Ran into Mack Rhoades, the fairly new Missouri athletic director who hired Tom Herman when he was at Houston and tried to bring him to Missouri. Rhoades is a rising star among ADs, someone Texas should keep an eye on. He also was the AD at Akron the last year that Shaka Smart was an assistant coach there. “Texas has got ’em a good one,” Rhoades said. “I think he’ll get it done here.”

On the Longhorns’ current golf team:

“The Texas men’s golf team won the NCAA championship in 2012, but at least one member of that team thinks the Longhorns are stacked again. They’re ranked fourth in the nation and have won four of their five tournaments this spring. Beau Hossler posted four wins in just six tries, matching a school record shared by Justin Leonard and Ben Crenshaw. “I think they’re going to win another national championship,” said Cody Gribble, who’s playing on the Web.com Tour. “They’re too good. On paper, this team is better than the year we won the national championship, just depthwise. One through eight, they’re extremely talented. They can interchange them at any time. Beau Hossler, Scottie Scheffler, Gavin Hall, Doug Ghim, Taylor Funk.”

On how the Big 12 has done so far in the NCAA Tournament:

“I’m not going to rake the Big 12 over the coals, but it needs to advance at least one team to the Final Four. True, the ACC has six of the 16 teams alive, but those six beat no better seed than No. 7 Dayton. That said, West Virginia, Baylor and Texas all lost to worse seeds, and Texas Tech was a tossup against Butler. The Bears were abysmal. The Longhorns were awful in the first half but had a great second half. I do not know the Mountaineers team that showed up — or didn’t show up — against SFA. Unless Kansas wins it all, critics are going to continue to snipe at the Big 12, and with good reason. It is embarrassing that no Big 12 team other than Kansas has been to the Final Four since 2004.”

For the rest of Kirk’s 9 things including his thoughts on who will win the Dell Match Play tournament, Tom Kite’s golf lineage and the Spurs’ defeat of the Warriors, click here.