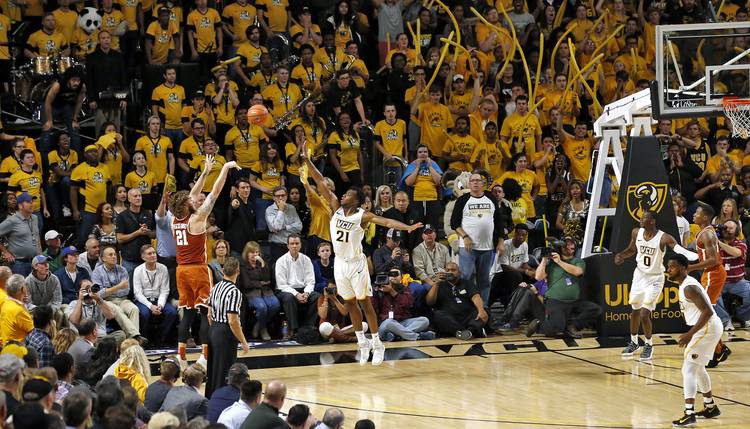 Texas' Dylan Osetkowski (21) shoots a 3-pointer against Virginia Commonwealth's Khris Lane (21) with less than a minute in the second half of an NCAA college basketball game in Richmond, Va., Tuesday, Dec. 5, 2017. Texas won, 71-67. (Mark Gormus/Richmond Times-Dispatch via AP)

Having spent six seasons at VCU, Smart knew full well what Tuesday’s game meant in Richmond. He was treated like a returning hero — until the game started. The Rams turned a 19-point deficit into a one-point lead, and the sold-out Siegel Center was deafening. This was jet engine-level noise from a crowd of 7,637 fans. Smart was now on the receiving end.

Andrew Jones clanged a free throw off the front of the rim with 3:38 remaining. The building rattled. Then he missed the second. The place roared.

Texas was held scoreless for more than four minutes down the stretch as the place was coming apart at the seams. But somehow, the Horns focused. Dylan Osetkowski hit a monster 3-pointer in the left corner, Kerwin Roach Jr. and Eric Davis Jr. both hit clutch free throws and Texas escaped with a dynamite 71-67 road win.

“Talk is cheap, and when we say we’ll run through a wall for that man, we mean it,” said freshman Mo Bamba, who had 13 points, 13 rebounds and four blocks. “But getting this one kind of proves it.”

Smart captured his 200th career win in a place he won the first 163. The silence as fans shuffled out never sounded so good to the 6-2 Longhorns, a club that went 0-11 in true road games last season.

“When we were up big, for VCU to come back and go on whatever run they went on, that says a lot about their team,” Smart said. “But our guys really hung in there and made some plays down the stretch to pull it out.”

Andrew Jones had a career-high 19 points before checking out in the closing minutes with a right wrist injury. Osetkowski had 17 points. Together, they swished seven 3-pointers, many coming from that now-heavenly left corner. Jones and Osetkowski were a big reason how Texas stormed to a 57-38 lead with 11:59 remaining.

As the lead mushroomed, there were scintillating moments. Start with Bamba. He showed every bit of his 7-foot, 9-inch wingspan when he went skyward over VCU’s Khris Lane. It was a dunk that left everyone momentarily stunned.

ESPN: “His offensive game is raw”

“I thought it was Space Jam. We were watching Space Jam,” guard Matt Coleman said. “That was my first time seeing something like that. That caught me off guard and caught the crowd off guard, too. That’s how you know it’s an away game.”

But the Rams (5-4), a team that came in shooting 41 percent from 3-point range, had a massive run in them. Lane hit back-to-back 3-pointers, and the crowd was rejuvenated. Justin Tillman, a VCU senior Smart signed, scored twice. Suddenly, Texas’ lead was gone when Lane buried a 3-pointer with 3:52 remaining.

Seeing Smart on the opposing bench, Lane said, “I know how much it meant to the city, to the school. I could just feel the emotion.”

But Smart got his team to calm down. “I just tried to get them to understand that we’re OK. Don’t flip out,” he said.

Despite UT’s long scoreless streak, VCU couldn’t score, either, like when De’Riante Jenkins air-balled a 3-pointer. Bamba hit two free throws, and the Horns went back up 64-63. Then, Roach found Osetkowski wide open in the corner. The junior made only 2 of 18 3-point shots in the first seven games. But he buried this one with 55 seconds left.

“I know I can shoot,” Osetkowski said. “The first couple of games, my shot hasn’t been falling. Thankfully my shot was falling, especially on that specific play.”

In the final minute, VCU wanted to foul a specific Longhorn — “Roach. Roach,” Lane said. Considering Roach is a 52-percent shooter from the line, it was a spot-on plan.

Roach made 1 of 2 shots with 40 seconds left. The coaches switched the personnel and had Roach throw the ball in, so VCU had to foul Eric Davis Jr. He made 3 of 4 free throws in the final 25 seconds to close it out.

Afterward, Smart and others on the Texas staff with VCU connections looked emotionally exhausted. Texas was required to play this game as part of Smart’s buyout at VCU. Two previous VCU coaches came back to Richmond and lost with their new teams.

Darius Theus, UT’s director of player development, finished third in VCU history in steals. He knew what this game meant for Smart, who constantly tried to downplay it all.

“Everything. Not just for him. It means everything for me, too,” Theus said. “Let’s be honest, I think everybody had this on their schedule. So did we. VCU was a special place. It changed his life, It changed my life. I’m just happy that we got a chance to come back.”

The Horns left just happy to get a road win. The guy dressed as Smart who stood adjacent to the UT bench and heckled him all night long, probably not so much.

“Was there someone impersonating me?,” Smart said with a laugh. “No, I did not see the impression. I’m sure it was terrific.”

Longhorns in the NFL: Week 13 features strong defense and an emerging receiver