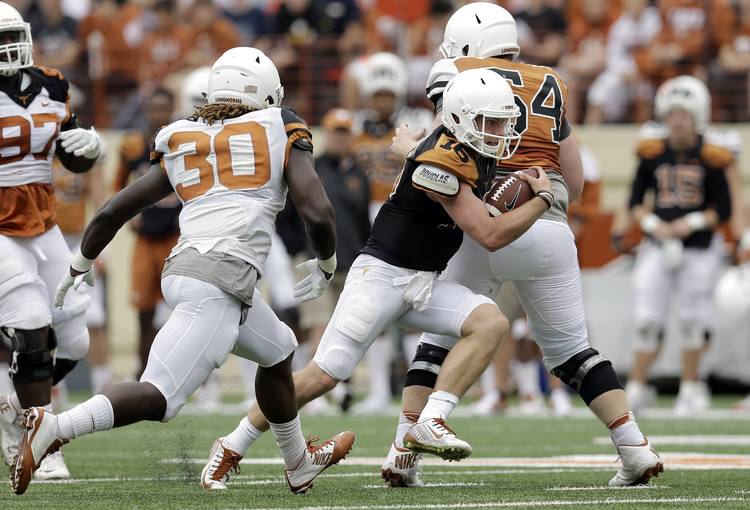 In today’s Golden’s Nuggets, Cedric touches on some Bevo-related items including Shane Buechele’s spring scrimmage and attendance in DKR of that game.

On the comparisons of “Boo Jr.” to a former UT quarterback:

“He (Shane Buechele) did bring to a mind a younger Colt McCoy, not the finished product we watched in 2008 and 2009, but the guy who eventually beat out Jevan Snead for the right to succeed Vince Young as the starter.

Buechele’s bomb to John Burt showed us that he has just enough juice in that arm to make college throws, and the scrambling ability is there though he did get blown up on what turned out to be the last play of the scrimmage.

Besides his obvious lack of college experience, the main concern has to be durability. He’s seems much smaller than his listed 6-foot-1, 191 pounds and we know there will come a day when he gets planted. His reaction to that planting will go a long way in determining if Boo Jr. is Texas’ long-time answer.”

On how attendance at UT’s scrimmage compares to other football programs:

“The reporters in the DKR pressbox came to an agreement that there were about 20,000 fans in the stands Saturday. That’s a couple of butts fewer than the announced 101,189 that attended Ohio State’s spring game or the 76,212 announced at Alabama’s.

Now it’s understood that Austin is a city that’s overflowing with social options. It’s also a given that the weather man warned us about rain on game day. With that said, the fan base can beat 20,000. It only buys into the long-held belief that Texas has a front-running fan base when it comes to football.”

For the rest of Cedric’s nuggets including his thoughts on Kawhi Leonard’s chance to win many NBA defensive player of the year awards and if the Dallas Cowboys select a QB in the NFL draft, click here.