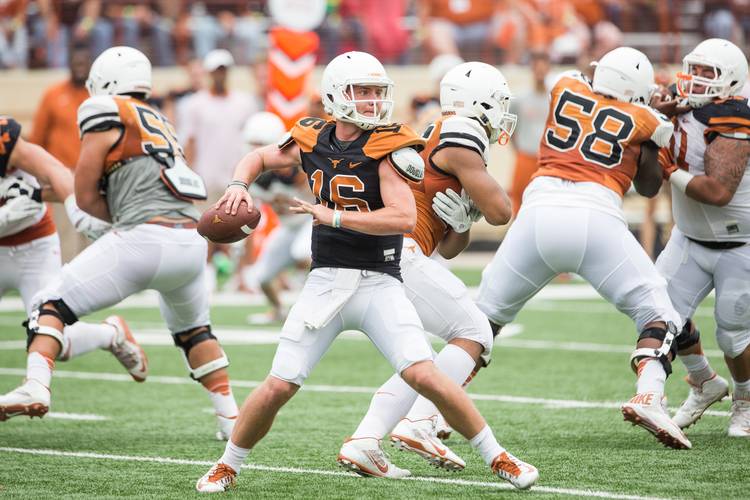 In today’s Golden’s Nuggets, Cedric touches on the big Bevo-related item: Who will start at QB for the Longhorns on Sunday? Here’s what he had to say about it:

Kent Perkins says he knows who’ll be the starting quarterback for your Texas Longhorns.

Finally, someone who can shed some light on one of the most asked questions of the 2016 offseason. So who is it, big man? Tyrone Swoopes or Shane Buechele? Matty Merrick?

“You can’t get that out of me,” said Perkins, a senior left guard. “Everybody asks me that question, but I can’t answer that question.”

But you do know, Kent?

He knows, but won’t be giving us any answers. Neither is Charlie Strong, who was asked 15 quarterback-related questions during Monday’s 34-minute press conference.

While Perkins is sure of the starter, teammates Malik Jefferson, Caleb Bluiett and John Burt all said they had no clue as to who will be the first to take the huddle.

The gut still says Strong trots Buechele out there for Notre Dame instead of Swoopes, but he hasn’t always gone the conventional route in these types of matters. Maybe, just maybe, he is following the recent trend of coaches not giving up the info when it comes to the most important position in team sports.

Strong is in no hurry to spill the frijoles.

“They’re both going to play,” he said. “Whoever the starter is, is going to be the starter.”

Not scintillating, but to the point. He did indicate that the starter will get the bulk of the reps, which is something we will monitor, especially if the lead dog plays like a mutt early on.

For the rest of Cedric’s Nuggets, including his take on Colin Kaepernick’s refusal to stand for the Star-Spangled Banner, click here.