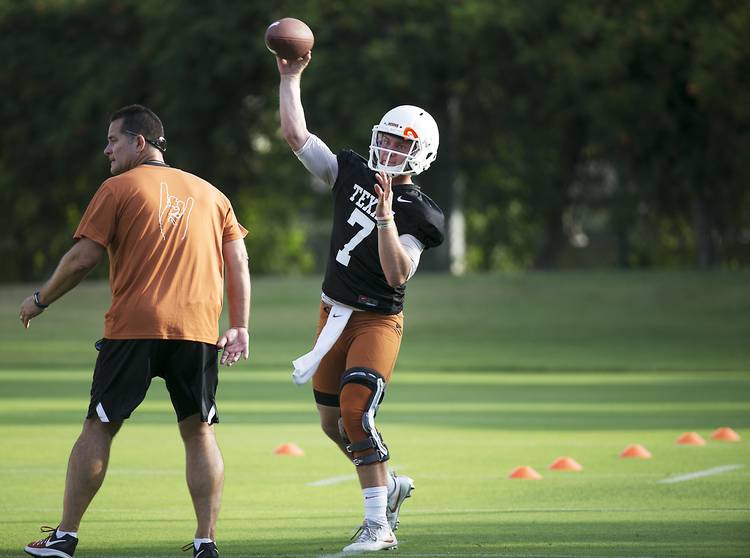 Tom Herman’s not saying it yet, but Shane Buechele will be Texas’ starting quarterback for 2017.

Buechele, a sophomore, is an interesting study since his freshman year was a real roller coaster with some of his struggles coming as a result of injury. Since it’s obvious he’ll be the guy come Sept. 2, I thought it would be interesting to see what former coach Charlie Strong said about him during Big 12 media days in 2016 and compare it with what Herman is saying about him now.

Back then, the talk was about Buechele being one of the most competitive guys on the roster, with pingpong marathons dominating the preseason conversation.

“You see gym rats — that’s what he is,” Strong said. “He’s always around the facility. Some guys just have that ability about him, and you can tell he’s just special. You just love his overall attitude.”

When asked about Buechele at Big 12 media days last week, Herman sounded mildly pleased, and that’s knowing the true critiques will come after a few practices in pads with those imaginary live bullets flying. Herman won’t name a starter until mid-August.

In Herman’s perfect world, Buechele would develop a Tom Brady persona in the huddle every play, not suffer a major injury and allow the coach to redshirt freshman Sam Ehlinger. Boo Jr.’s history with injuries suggests those are long odds indeed.

For the first time since Strong’s initial season, when David Ash was the incumbent, there’s the comforting feeling that the guy who started last year will start the opener.

You need that type of continuity. Show me a coach who is starting a freshman quarterback, and I’ll show you a very nervous coach.

For the rest of Cedric’s Nuggets, including his thoughts on LaVar Ball, click here.