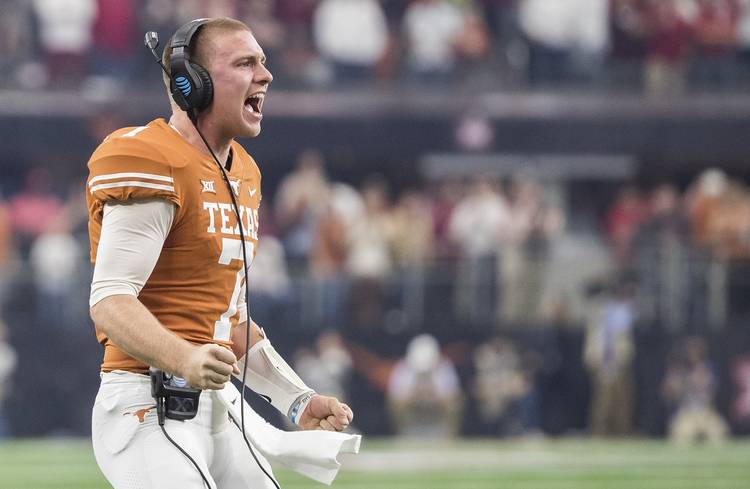 Texas quarterback Shane Buechele (7) celebrates a score against Oklahoma at AT&T Stadium in Arlington, on Dec. 1, 2018. [RICARDO B. BRAZZIELL/AMERICAN-STATESMAN]

It didn’t take long for former Texas quarterback Shane Buechele to make a good impression at his new school.

A redshirt junior, Buechele has been dubbed a team captain at SMU. Despite not arriving at SMU until this summer, Buechele received enough votes from his new teammates to earn this honor.  Receiver James Proche, linebacker Richard Moore and safety Rodney Clemons were also named captains for a 2019 season that kicks off on Aug. 31 with a trip to Arkansas State.

It’s an honor to be elected a captain by my teammates. Let's get to work. #PonyUpDallas pic.twitter.com/McrhEUXR6X

A member of UT’s 2016 recruiting class, Buechele announced in February that he would leave the Longhorns and head to SMU as a graduate transfer. In 23 appearances at Texas, Buechele threw for 4,636 yards and 30 touchdowns. A 19-time starter, Buechele also came off the bench twice this past season to relieve an injured Sam Ehlinger and guide UT to key wins over Baylor and Iowa State.

Buechele lost the quarterback competition to Ehlinger ahead of the 2018 season. He was still a member of the Longhorns’ leadership council. He was often praised by his coaches and fellow teammates for how he handled his back-up assignment.

When asked about Buechele earlier this month, Ehlinger said he had talked to his former teammate a few days earlier. Ehlinger, who was recently named a captain at Texas, also predicted that Buechele would have a big year in Dallas. Said Ehlinger: “I’m expecting him to have a great year because he’s an incredible dude and an incredible quarterback.”

Funeral for Cedric Benson set for Saturday in Austin